No.1 seeds James McCabe and Talia Gibson scoop the 16/u Australian Championships titles on Sunday in Melbourne at the December Showdown. 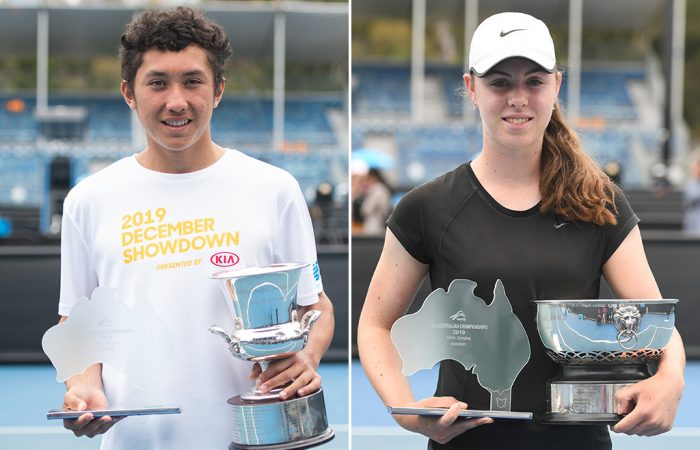 It was a stellar week for the top seeds in the 16/u Australian Championships at Melbourne Park, with James McCabe and Talia Gibson claiming the boys’ and girls’ singles titles on Sunday.

As well as winning the 16/u titles, McCabe and Gibson both earn wildcards into the Australian Open 2020 junior championships.

“It’s amazing, it’s been my goal (to win the 16/u event) since for like two years now. I’m just like really happy, and all that hard work, it’s all paid off,” McCabe said.

“I’m going to train even harder (for the AO juniors). That’s one of my goals done. (Now) next goal. So looking forward it.”

McCabe recovered from 5-2 down in the first set and was forced to maintain his concentration as Sekulic battled physical problems — prompting two medical timeouts — during the second set.

“I stayed mentally more sound than he did, I stayed calmer,” McCabe said.

“He didn’t get any reaction from me … so I stayed calm and controlled the controllables.”

Gibson was also forced to battle back from a deficit, finding herself down 3-0 in the second set before storming back to win.

It was her third event of the December Showdown; she won two round-robin matches in the 18/u championships and also pushed Destanee Aiava to a second-set tiebreak in the first round of the AO Play-off.

“I’m always trying to keep it to two sets, really. After winning that first set I thought, down 3-0 in the second, I can’t keep just letting games go like that. So just got to keep fighting and try and come back as best as I can, and to be able to do that was great,” Gibson said.

“It feels really amazing … winning it is just a really great feeling. I’ve played a lot of matches and to come this far just feels really good.

“It’s always a great experience playing on these courts here in Melbourne. I’ve played on them for a lot of years in a row now and knowing that the pros are going to be out here soon is pretty exciting.”