John-Patrick Smith overwhelms Max Purcell in the AO Play-off final on Sunday, securing his place in the main draw at Australian Open 2020. 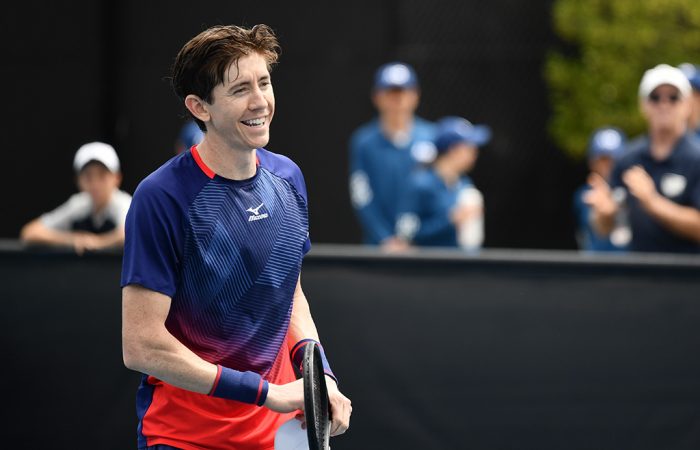 John-Patrick Smith earned an Australian Open 2020 main draw wildcard on Sunday with a commanding performance in the AO Play-off final.

He had previously been in two finals, falling to Jordan Thompson in 2015 and Omar Jasika in 2017.

“Everyone else is saying, it’s got to be third time’s a charm. And obviously I try and ignore it,” Smith smiled.

“But it worked pretty well today — third time is a charm in this case.

“I’ve had a couple of close qualifying last-round losses here, I think ’16 and ’17, so it’s a great feeling to get back there, and it kind of gives me two weeks before the Australian Open to get some matches under my belt here just before main draw.

“The ultimate goal would be to do a couple of rounds here, which would be great.”

In his 3rd #AOPlayoff final in six years, @jpatsmith breaks through with a dominant 6-3 6-4 6-1 win over Max Purcell to earn an @AustralianOpen 2020 wildcard.

Smith dropped just one set en route to the final, losing a torrid second-set tiebreak to Aleksandar Vukic before wresting control of the match to win in four.

Purcell, by contrast, cruised into the final without the loss of a set.

But when he came up against Smith on Sunday, he was unable to counter the Queenslander’s ceaseless attack.

Smith denied Purcell any rhythm, serving exceptionally, generally keeping points short and taking the racquet out of the 21-year-old’s hands.

Smith broke early in each set and by the third Purcell looked completely discouraged, holding serve in the third game but unable to win another as the left-hander motored through the last few games.

The contest ended on a Purcell double-fault.

“He hasn’t really been tested this whole week, he’s won every single match in three sets. I was tested out here against Vukic, which kind of made me pretty mentally tough and that kind of happened out here today — I think I was ready for it,” Smith assessed.

“This whole week I’ve been breaking pretty early in my matches. It kind of just gives me a little bit of freedom to roll on, serve bigger, take a couple more chances, more than I usually would.

“I was kind of playing a lot freer and just kind of going for my shots a lot more this week.

“So it’s been pretty good to kind of take confidence out of that and hopefully translate that to a few more matches coming up in the summer.”

Smith’s next goal is the Canberra ATP Challenger tournament in early January before turning his attention to the Australian Open, where he also hopes to reunite with Astra Sharma with whom he advanced to the AO 2019 mixed doubles final.

In his only previous appearance in the singles main draw, he fell in straight sets to Joao Sousa in 2013.

“When I came in in 2013, I was kind of struggling a little bit with injury in the weeks before that,” said the world No.311.

“This is really going to have been the best preparation for it, obviously getting used to the courts. Getting out here, getting into the environment, getting the whole atmosphere under my belt’s been really good.”