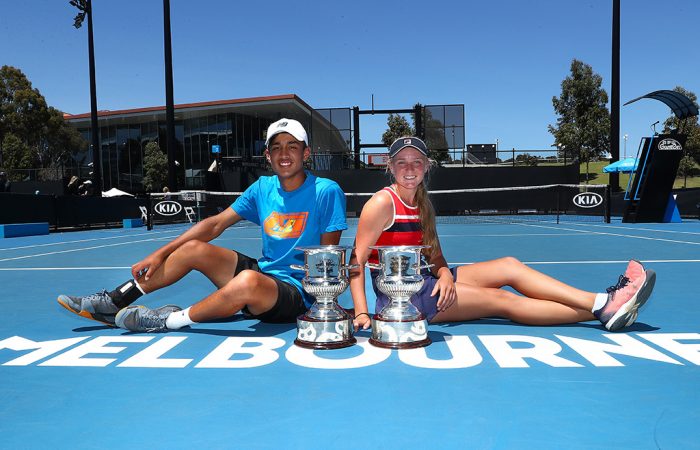 Despoja, the second seed, emphatically claimed a 6-3 7-6(6) with a forehand winner on his third match point to defeat No.1 seed Zachary Viiala.

Earlier in the second set, Despoja faced two set points when serving at 4-5, 15-40, before hauling himself back into the match.

“It was pretty crucial, because if I lost that set, the third set would have been a lot tougher — he would have had lots of momentum,” Despoja told tennis.com.au.

“I didn’t realise until I won it, I didn’t know if (my forehand) was in or not (smiling). It felt really good to get the win, especially off the winner as well.”

For the majority of the match, Despoja played with more intensity and power than his doubles partner to claim victory in one hour and 23 minutes.

“The first set I came out playing really well, and then I kind of kept calm in the second set,” Despoja said. “I mean, I’m still in shock right now — it’s hasn’t sunk in for me yet (laughter).”

Like the boys’ final, this was a battle between the tournament’s top two seeds, but this time, it went the way of the No.1 seed, with Preston overcoming Culley 7-6(3) 4-6 6-3.

And, like Despoja, she clinched the title with a forehand winner, taken as a drive volley out of the air.

“That felt good — it’s always good to end a match with a winner, or better shot,” Preston told tennis.com.au.

“There were a lot of momentum swings. Second set I was 4-2, 40-15 and then losing that game, she got more momentum going through the second — I didn’t win another game in that set.

“You’ve just got to forget about (losing a lead) and focus on the next set. It’s gotten better (my focus) over the years because it’s happened a lot (laughter). It’s not easy, but it’s getting easier.”

Each time her rival regained ground, but ultimately it was Preston’s superior power and relentless aggression on both the return and from the back of the court that proved the difference.