Schoolkate advances to 18/u quarterfinals

Top seed Tristan Schoolkate was among the players advancing to the knock-out stages of the 18/u Australian Championships as part of the December Showdown. 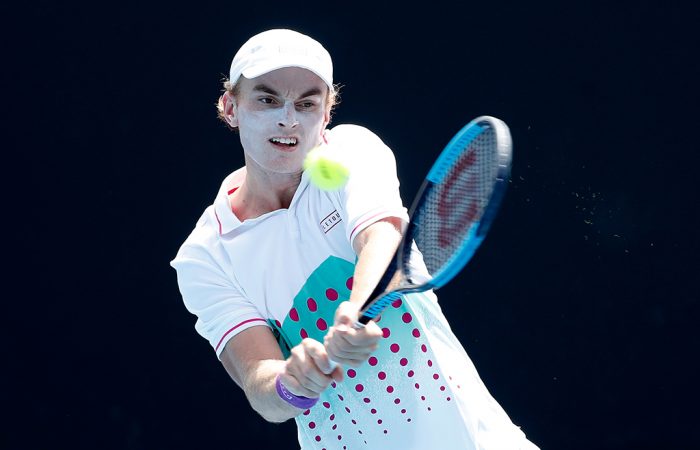 Tristan Schoolkate scored his third win of the week on Wednesday to advance to the quarterfinals of the 18/u Australian championships at Melbourne Park.

The West Australian, seeded No.1, beat Pedro Papangelis 7-5 6-1 to go undefeated in the round-robin stage of the 18/u event, one of four national junior championships forming part of the annual December Showdown.

He will play qualifier Sam Edgar on Thursday for a place in the semifinals.

“I’m feeling pretty good. (Recently) had a bit of a training block in Perth, I found out that I was playing in the AO Play-off (as a wildcard next week) so been training pretty hard and a little bit longer than usual, just practice for five sets,” he told tennis.com.au.

“So feeling good getting a few matches in here and playing well in all the round-robin matches, so yeah, pretty happy with how I’m going.

In the second half of the year he reached the third round of both the Wimbledon and US Open junior singles events, before playing his first ever professional level tournaments on the Australian Pro Tour.

There he flourished, advancing to the quarterfinals in Brisbane as a qualifier — stretching eventual champion Dayne Kelly to three sets — and later winning through to the third round of the Traralgon Challenger.

These results earned him his first ATP ranking points.

“I qualified one week (in Brisbane), sort of just scraped through in qualifying and the got that first win (in main draw) under my belt for my first point, 7-6 in the third. Then sort of steamrolled from there,” he reflected.

“The next week (in Toowoomba) got another point, lost another tight match in the second round. Then in the Challengers I played really well, won a couple of rounds and got one of my biggest wins (over world No.269 Aleksandar Vukic). So happy how it’s gone.

“I always thought I had the game to be able to play and transition (up the levels) but it was just a matter of seeing if I could do it mentally. I think the juniors results helped and gave me a lot of belief that I was actually matching it with the top guys.

“Going into the pros, it was a whole different thing … they don’t give you cheap points and you have to work for the extra couple of points here and there. I played really well when it mattered, and got going, and was playing well.”

Also advancing to the 18/u quarterfinals was second seed Dane Sweeny, who like Schoolkate went undefeated in three round-robin matches this week.

In the girls’ 18/u championship, fourth seed Annerly Poulos progressed to the quarterfinals after coming through the tightly-contested Group D.

Poulos, Amy Stevens and Talia Gibson — named Female Junior Athlete of the Year on Monday night at the Australian Tennis Awards — all finished with two wins and one loss, with Poulos and Stevens advancing on the basis of sets won and lost.

That group was headed by top seed Amber Marshall, who played one match before having to withdraw from the tournament.