Fed Cup final: draw to be revealed on Friday

Team selections for the Fed Cup final singles and doubles rubbers will be announced at Friday morning's draw ceremony in Perth. 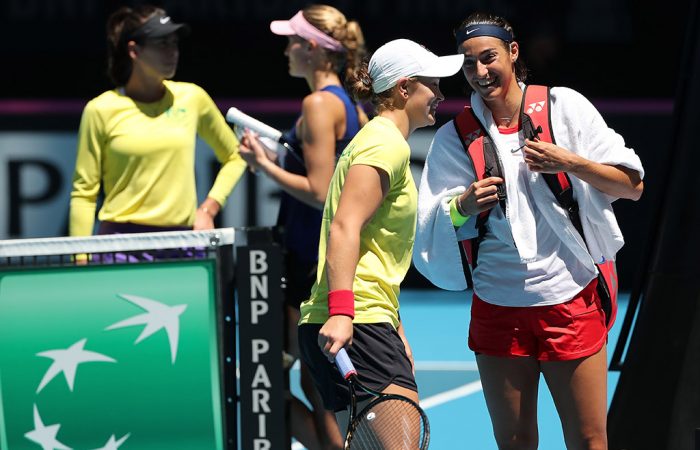 The order of play for this weekend’s Fed Cup final between Australia and France will be determined during a draw ceremony from 9am Friday (AWST) at Perth’s State Theatre.

The first team to win three of those matches at Perth’s RAC Arena will be crowned the 2019 Fed Cup champions.

Saturday’s singles rubbers will see Australia’s No.1 player take on the French No.2, and France’s top player facing the Australian No.2.

Should team captains Alicia Molik and Julien Benneteau follow the rankings exactly as they stand now, world No.1 Ash Barty would be Australia’s top player and would face French No.2 Caroline Garcia, the world No.45, while French singles No.1 Kristina Mladenovic — ranked 40th — would tackle Ajla Tomljanovic, the Australian No.2 and world No.51.

Sunday is when the reverse singles rubbers are staged, where the No.1 players from each nation go head-to-head, and the No.2 players also clash.

The doubles rubber concludes the day’s action and rounds out the tie.

It is during the reverse singles matches that captains can choose to make substitutions; in Australia’s first-round victory over the United States in February, Molik chose to replace Kim Birrell — who lost to Madison Keys on the opening day — with Daria Gavrilova as the nation’s No.2 player behind Barty.

Molik has already indicated that Barty will partner Sam Stosur in the doubles rubber while the French team are likely to opt for a Mladenovic-Garcia combination.

Both Barty-Stosur and Mladenovic-Garcia won thrilling three-set live fifth doubles rubbers in April’s semifinals to send their nations into the World Group final.