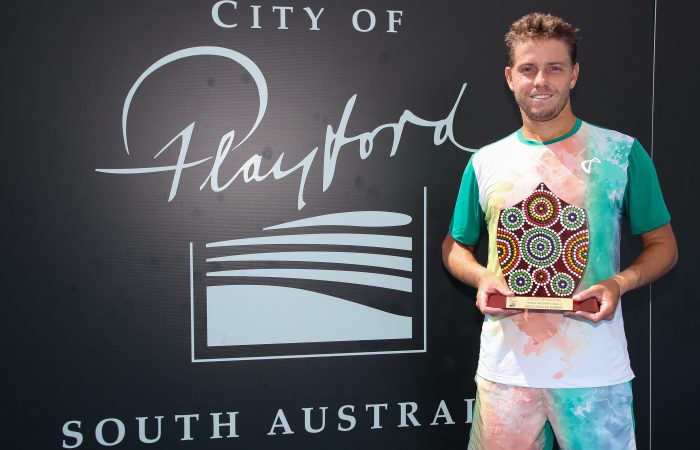 James Duckworth has claimed his third ATP Challenger title this year, taking out the City of Playford International II with a straight-sets win over top seed Yasutaka Uchiyama of Japan.

After titles in Bangkok and Baotou, and with his ranking now edging closer to the world’s top 100, the former No.82 is pushing hard to earn direct entry into Australian Open 2020. “This will help massively,” he said.

Duckworth moved through the Playford draw without the loss of a set but said the matches were closer than reflected on the scoreboard. “The first few days were very hot and the ball was flying around everywhere. I do like those conditions, but it cooled down and got a fair bit slower and windier after that. It was tricky to adjust but I think I did a good job.”

He also praised the crowd for their support in the final. “It was a tight first set and it just came down to a few points. They really helped me in those key moments.”

Uchiyama, the world No.86, has recently broken into the top 100 for the first time himself and has been in career-best form. “He’s playing well, he’s got a very good serve and it’s tough to read. I knew I wasn’t going to have many chances, it was just a matter of trying to make the returns if possible, and capitalise on any opportunities,” Duckworth said.

The Sydneysider now heads to ATP Challenger events in Kobe, Japan, and Pune, India, in a bid to improve his ranking. “There’s a few niggles here and there which I think everyone has towards the end of the season but nothing that’s stopping me from competing well,” he said of his upcoming schedule.

The doubles title was taken by Finnish duo Harri Heliovaara and Patrik Niklas-Salminen, who defeated American Evan King and Ruben Gonzales of The Philippines.