WA's Talia Gibson and Taylah Preston have been selected to represent Australia at this weeks WTA Future Stars. 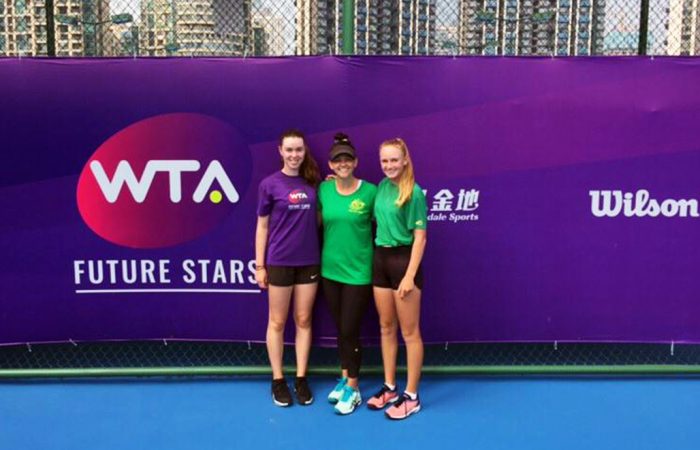 Western Australia’s own Casey Dellacqua will mentor two of the state’s top junior tennis talents in Taylah Preston, 14 (Hocking, Perth) and Talia Gibson, 15 (Alfred Cove, Perth) as they compete at the WTA Future Stars in Shenzhen, China this week.

The 2019 WTA Future Stars tournament, which commences today and runs to 27 October, features 56 players from 24 of the world’s top junior nations in the 14/u and 16/u age groups.

The competition finals will be staged prior to the official opening ceremony of the year-ending WTA Finals, on Sunday 27 October.

Australia will be well represented at the prestigious event, with world No.1 Ash Barty leading the singles competition, and fellow Grand Slam champion Sam Stosur starring in the doubles draw.

Dellacqua is delighted to be travelling with the girls as their mentor, her second year in this role.

“The WTA Future Stars is such a fantastic experience for our up-and-coming players. They have the chance to play against the top juniors in the world in a competitive environment, as well as enjoy so many fantastic off-court activities,” Dellacqua, said.

“It’s not every day that junior players have the chance to play alongside their idols at an event like the WTA Finals. I’m sure it will be an experience Taylah and Talia will remember for a long time, and will keep them motivated in the future.”

“After finding out I had won the WTA Future Stars points race, I immediately accepted the incredible opportunity to attend,” Gibson said.

“I hope I gain some meaningful experience through one of the world’s premiere tennis events and I hope in some way this opportunity will help further my career in the future.”

Taylah Preston, aged 14, has also had a strong year and is currently Australia’s top ranked 14/u girl.

In 2019 Preston represented Australia internationally in the World Junior Tennis competition, and recently won her first ever junior ITF event, winning the South Australian Junior International title in both singles and doubles.

“It’s so exciting to be playing the WTA Future Stars event in China, it means a lot to me,” Preston said.

“It will be amazing to be there with so many of the world’s top ranked female players. My goal one day is to be a WTA player on the professional circuit competing against the best in the world and I’m thrilled to be involved.”

For more information about WTA Future Stars and the draw for the event visit http://www.shiseidowtafinalsshenzhen.com/wta_star