World No.1 Novak Djokovic was at his aggressive best in beat Australian qualifier John Millman in the final of the ATP 500 event in Tokyo. 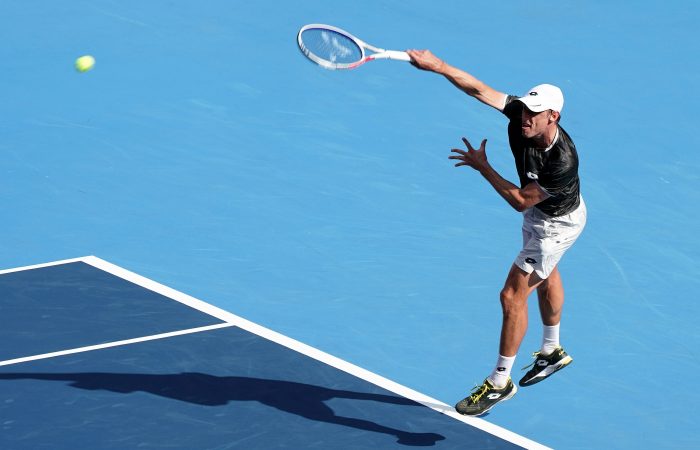 John Millman’s breakthrough week in Tokyo ended with a loss to world No.1 Novak Djokovic.

The Serb extended his winning record over Millman to 3-0 thanks to a 6-3 6-2 win on Sunday at the Ariake Coliseum.

Yet the 30-year-old Australian, playing in his second ATP final and going for his first tour-level title, found Djokovic too strong at the final hurdle, going down in 69 minutes.

Perfect 🔟@DjokerNole captures the 🏆 in a debut for the 10th time in his career, vanquishing Millman 6-3 6-2 to take home the Tokyo hardware.#rakutenopen pic.twitter.com/UaN05FIsuY

“It sounds silly to say but I hope everyone all around the world realises just how good you are,” a gracious Millman told Djokovic during the trophy presentation.

“You’re an absolute champion and you’re the type of person who’s going to be remembered forever. Your legacy is continuing to build and will live on long after you’ve finished playing.

“But I’m sure you’ve got a fair few more years left. So congratulations.”

Both Millman and Djokovic had acknowledged before their meeting that the final was likely to be a physical, attritional battle from the baseline.

And playing as if to avoid that, Djokovic was the more aggressive of the two, breaking serve in the fourth game of the opening set and smacking 14 winners to Millman’s five on his way to taking the first set in 31 minutes.

Millman arrived at 40-15 in the opening game of the second set but the top seed fought back and broke serve to deflate the Australian.

Djokovic then broke serve again in the third game and had soon established what would prove to be an insurmountable 6-3 4-0 lead.

Millman, as is customary, did not go away, holding serve in the seventh game to force Djokovic to serve for the title at 5-2.

The world No.1 did not falter.

Millman struggled to match the aggression of Djokovic, who finished with 23 winners to the Queenslander’s 11 as well as winning 8/12 points at the net and 87 per cent of first-serve points.

Djokovic converted three of the four break points he earned throughout the match while not allowing Millman a single one.