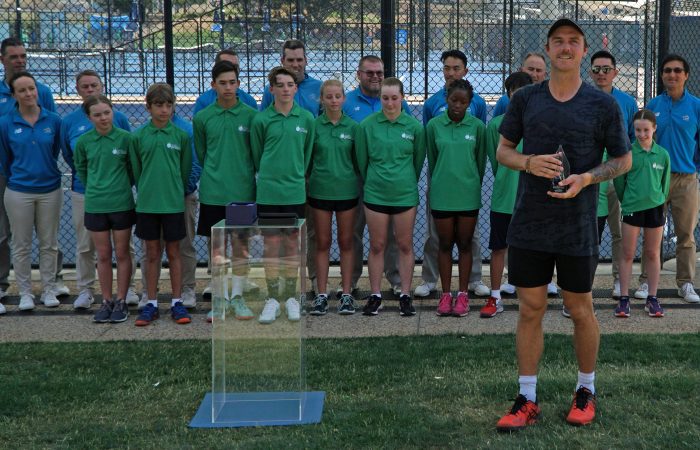 Dayne Kelly captured his first title of the year after defeating No.7 seed Luke Saville at the QTC Brisbane International on Sunday.

After struggling early in the tournament, the Victorian put in his best performance of the week, with his serve instrumental in the 6-2 6-4 victory.

“I’d spent enough on the court to feel pretty good by the end of it,” Kelly, 29, said. “The first few matches were really long against the younger guys, they kept me out there longer than I would have liked. I was much happier getting it done in straight sets.”

The former world No.252 has been taking a more considered approach to his game this year.  “I’ve just been trying to focus on one day at a time to be honest,” he said. “The tennis is going in the right direction now which is good, but I’m really just putting my mental and physical health ahead of anything else.”

The women’s final saw the hot hand of the current Australian Pro Tour, American Asia Muhammad (No.6), earn herself another title in upsetting the tournament’s No.3 seed, West Australian Maddison Inglis. The American started strong, defending an early break to take the first set, but Inglis turned the momentum around before Muhammad reclaimed her authority to win 6-3 3-6 6-3 and claim her second title in three weeks.

South Australian Saville had some earlier success, partnering Jake Delaney to take out the men’s doubles title on Saturday. The pair defeated fourth seeds Francis Alacantara of The Philippines and Tasmanian Harry Bourchier, 6-1 3-6 [10-6], surviving their third match tiebreaker of the tournament.