Qualifier John Millman wins his sixth match in a row in the Japanese capital to advance to the biggest ATP final of his career. 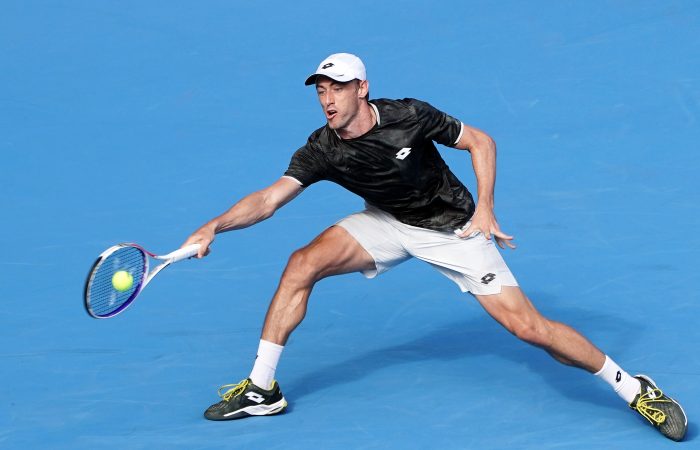 John Millman will play Novak Djokovi for a shot at his first career ATP Tour title after winning through to the Rakuten Open final on Saturday.

The Queenslander beat Reilly Opelka 6-3 7-6(4) in under 90 minutes in Tokyo in the pair’s first meeting.

Millman saved match points to beat Bradley Klahn in the first round of qualifying en route to the main draw and has now won six straight matches in Toyko.

“It doesn’t get any easier, does it?” Millman told atptour.com when discussing the final. “I’m sure it’ll be physical, lots of baseline exchanges.

“I get to play a final of an ATP 500 in such a special place like Tokyo. For me, that’s why you play. That’s why you go through the graft and some of the tougher times, to give yourself an opportunity like this. It’s pretty special.”

Millman won 86 per cent of his first serve points and saved both break points he faced to clinch victory over an opponent who stands 210cm tall and who pounded 13 aces.

He broke Opelka’s first service game of the match on his way to a 3-0 lead, setting the tone for the opening set. And, after staving off a set point in the 10th game of the second set to eventually level scores at 5-5, Millman won the last four points of the subsequent tiebreak to wrap up the win.

“I was really happy to take the few little chances I had and took care of my own service games pretty well,” Millman said.

From the quallies to the final…

The result continues a rich vein of form for the 30-year-old, who has won 11 of his past 12 matches after also capturing the recent ATP Challenger title in Kaohsiung.

Currently ranked 80th, Millman is expected to soar 22 places to No.58 when next week’s rankings are released, sending him back in the direction of his career-high mark of No.33, set in October 2018.

Millman is yet to beat Djokovic, falling to the Serb twice in 2018. Djokovic later on Saturday brushed aside David Goffin in straight sets.

The Australian’s only other appearance in an ATP final came in Budapest last year, where he fell to Marco Cecchinato.