John Millman advances to his first ATP semifinal of 2019 with a commanding win over local star Taro Daniel in Tokyo. He faces Reilly Opelka for a place in the final. 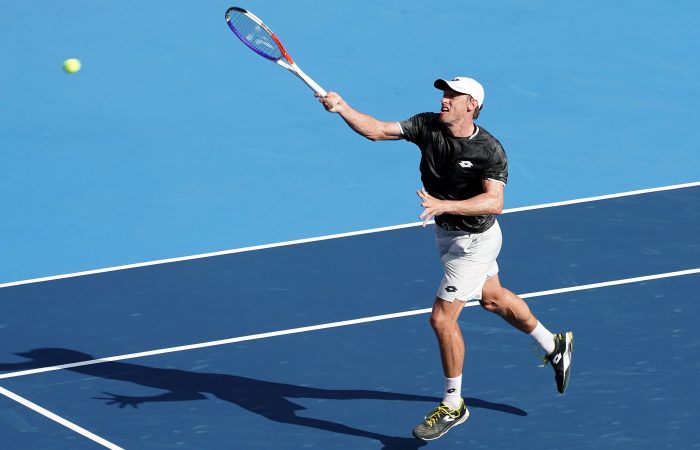 Australia’s John Millman has advanced to his first ATP semifinal appearance for the year after sweeping aside Taro Daniel 6-4 6-0 at the Japan Open on Friday.

The world No.80, who needed to save three match points in the first round of qualifying, eliminated Japan’s last remaining player with a minimum of fuss.

Millman put aside his friendship with the home favourite in a match lasting one hour and 19 minutes in Tokyo.

The Aussie makes his first #ATPTour semi-final this season with a 6-4, 6-0 triumph over Daniel at the @rakutenopen 👏 pic.twitter.com/toPSyiPLLP

Daniel defeated Millman’s compatriot Jordan Thompson to reach the quarterfinals but his chances of a second Australian victim in as many days were extinguished after a tight first set.

“That first set really could have gone either way. I came out of the box really well in that second set,” Millman said. “That was probably the difference today.”

Millman broke the wildcard’s serve six times, winning 56 per cent of his return points to continue a strong stretch of recent results.

Playing in his fourth ATP quarterfinal of 2019, Millman advanced to just his second career semifinal, after Winston-Salem in …

This marks the first semifinal he has reached at ATP 500 level, and he has now won 10 of his past 11 matches after winning the recent Kaohsiung Challenger.

He takes on big-serving American Reilly Opelka for a place in the final.

“I’m very comfortable in Japan. I’ve played here a lot. I love the conditions here, I love playing in front of the crowds,” Millman said.

World No.1 Novak Djokovic continued his dominant form in Tokyo to storm past Frenchman Lucas Pouille 6-1 6-2 and into the semifinals.

Serbian Djokovic has served with ruthless efficiency in his previous two matches and more of the same was on display as the 32-year-old fired eight aces and won 82 per cent of points on his first serve to swat aside fifth seed Pouille in just 50 minutes.

Djokovic is playing in his first tournament since retiring from his US Open fourth-round match against Stan Wawrinka because of a problem with his left shoulder.

He has now reached at least the semifinals in six of his past seven tournaments going back to the Madrid Open in May.