Strength of mind key for De Minaur in Zhuhai

Alex de Minaur's third ATP title of the season in Zhuhai was characterised by an impressive mental strength -- especially in challenging circumstance in the final. 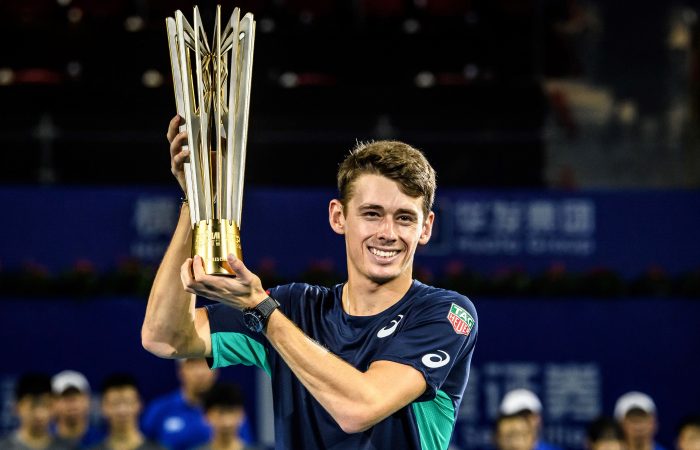 Alex de Minaur’s latest ATP title was, in many ways, a triumph of the mind.

The young Australian defeated Adrian Mannarino 7-6(4) 6-4 for his third ATP trophy of the season, after winning other 250-level hard-court tournaments in Sydney and Atlanta.

De Minaur has well and truly emerged from a mid-season slump; between March and July he won just three of 11 matches as injury issues, then confidence woes, set in.

But after a heartbreaking second-round loss at Wimbledon to Steve Johnson, De Minaur flipped the script, winning his very next tournament in Atlanta.

It was a seismic rebound – the 20-year-old has now won 14 of his past 18 matches and returned to the top 25, notching his first two top-10 wins along the way, over Kei Nishikori at the US Open and then Roberto Bautista Agut in the Zhuhai semifinals.

It was this confidence and strength of mind that allowed him to put away a tricky opponent in Mannarino.

“I’ve got a psychologist which I talk to every day and it’s been a big help.

“And, honestly, tennis is such a tough sport as it is, it’s only you out there on court, so you’ve got to deal with a lot of different pressures and expectations and when things aren’t going well.

“So to have someone like that to be on my team and be able to clear my mind and make me stronger mentally, I think it’s been the biggest change for me.

“That’s the way I’ve been progressing, thanks to all the work I’ve done with him.”

In terms of the Zhuhai final match-up, De Minaur was superior in most areas.

Quicker than Mannarino around the court, possessing a touch more power off the ground and more effective on serve, De Minaur did not face a single break point against the Frenchman and won significantly more points on both his first and second serves.

He was the better returner too, generating 13 break points throughout the match – including eight in the first set alone.

But the wily Frenchman saved the first 12, often with daring, inspired, creative play that could have overwhelmed a less-prepared player with frustration.

Despite his difficulties in putting the left-hander away, De Minaur tapped into his increasing reserves of mental strength and was never discouraged.

"I don't like to complain about conditions and playing surfaces, how the ball's playing. At the end of the day complaining about it is not going to get you anywhere." pic.twitter.com/gxFaBGxwp6

“In that first set I had so many chances and I wasn’t able to break him, so I just had to make sure I stayed calm and just kept on backing myself, stay positive. I was able to play some great points to turn the tiebreak around and that first set was huge,” said the Australian, who recovered from 2-4 down in the first-set tiebreak to win five straight points.

“Sometimes it doesn’t happen, but the most important thing is to keep fighting. That’s what I got to try and do every time I step out on court, I need to make sure that I’m positive and I fight until the end.

This was a satisfying triumph for De Minaur, who felt truly embraced by the Zhuhai fans and remarked that it felt as if he was almost playing at home.

He said he planned to celebrate with a trip to Burger King – he and his team went passed it every day but had resisted visiting, opting for healthier food – and possibly some dessert via room service.

But with just four tournaments to go in 2019, he is certainly not content to ease his way into the off-season.

“I would sign anywhere to get another title, finish the year,” he said.

“But this was a real big goal of ours. After the US Open, I had a very good week there, still felt like I could perform and had a little bit of chances and opportunities that flew away, but we made sure we came back, trained really hard to make sure to finish the year strong. That was one of my goals.

“I want to keep on pushing … I’ve got to push as hard as I can to keep putting myself in good positions.

“I’ll do everything I can to recover and on we go to Tokyo.”