Alex de Minaur claims his third title of 2019 in Zhuhai and will reclaim the mantle of Australia's No.1 male player. 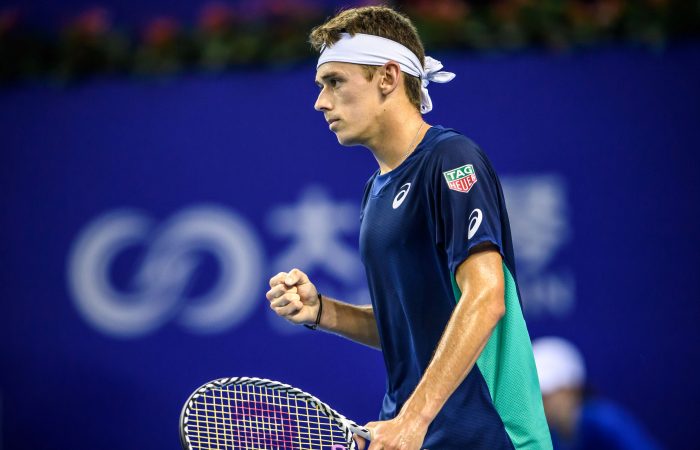 Alex de Minaur came out on top of a high-quality contest over Adrian Mannarino to win the inaugural ATP tournament in Zhuhai, China.

De Minaur, who earlier this season triumphed in Sydney and Atlanta, is expected to rise six places to world No.25 next week – seeing him reclaim the top Australian men’s ranking from Nick Kyrgios.

The win over Mannarino capped an excellent week in Zhuhai for De Minaur, who beat John Millman, former No.1 Andy Murray, Borna Coric and world No.10 Roberto Bautista Agut en route to the final.

“It was a complete battle today – it could have gone either way,” De Minaur said during the trophy presentation.

Despite games going on serve throughout the first set, De Minaur always looked the more likely player, with the Aussie earning eight break points – five in the third game, three in the fifth – to threaten the Frenchman’s serve.

Yet Mannarino saved each one, and when he went ahead 4-2 in the ensuing tiebreak, it appeared to be a massive opportunity missed for the 20-year-old.

Changing ends and walking back to the opposing baseline, De Minaur had his eyes almost completely closed, appearing in a meditative state.

It seemed to put him in a better headspace.

He then smacked two forehand winners to wrest control of the momentum, and ultimately won five straight points to snatch the opening set.

A 0-40 lead and three more break points came and went in the sixth game of the second set; De Minaur was now 0-from-11 on break point chances.

Mannarino was, admittedly, excellent under pressure, conjuring aggressive, inspired tennis to hit his way out of trouble.

But De Minaur also deserved credit for shrugging off the disappointment of those missed opportunities; after Mannarino eventually held to level scores at 3-3, De Minaur responded with a resounding hold of his own to put the pressure straight back on the 31-year-old.

Serving to stay in the match at 4-5, he made two errors and then double faulted to fall behind 0-40.

He saved the first championship point – and 12th break point – with an unreturnable serve at 200km/h. Yet De Minaur produced a stinging forehand on the following point that the Frenchman couldn’t control.

“He’s been playing great all the week and today he was just too good for me,” Mannarino said of the Australian.