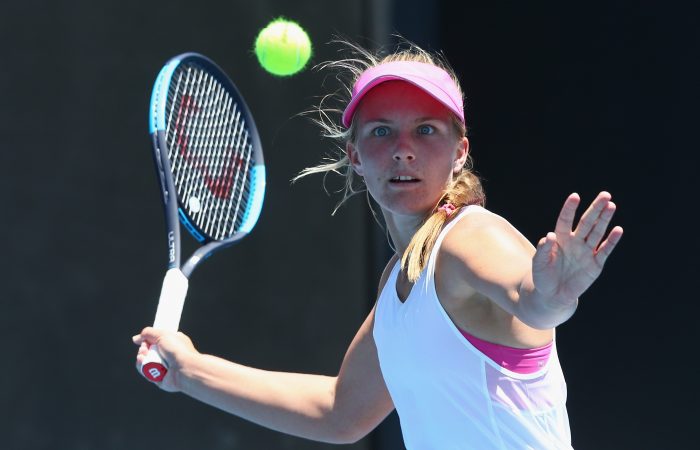 Top-seeded Aussies Maddison Inglis and Olivia Rogowska both crashed out of the Cairns International on Saturday leaving the final an international affair.

West Australian Inglis, the No.1 seed, was ousted by her doubles partner, American Asia Muhammad, 6-4 6-0, while Rogowska (No.2) suffered a similar fate at the hands of Slovakian Zuzana Zlochova, falling 6-2 6-4.

“It was a pretty disappointing day, but Asia did so well,” Inglis said. “I don’t think I played my best but it’s really good to get a few matches in the first tournament of the swing. I’m feeling pretty fresh so that’s kind of what you want out of the first one.”

Following her singles disappointment, Inglis joined Muhammad on court to contest the doubles final, which despite taking a decisive lead, they eventually lost in a match tie-breaker 5-2 7-6(2) [10-7] to Australia/New Zealand duo Abbie Myers and Emily Fanning.

“I really wanted to win the doubles, have some fun and finish off on a good note. I thought we had it, a set and a break up, but it wasn’t meant to be,” Inglis said.

The Perth 21-year-old has enjoyed her best year on tour by some margin in 2019, rising 200 places in the world rankings to reach a current career-high of No.189.

“This year’s been awesome,” she said. “I honestly don’t really know what changed for me but I’m so happy with how it’s going. I’ve had a lot of matches and that’s good for me, it’s when I play my best.”

Inglis entered Cairns as a top seed for the first time in her career. “It’s pretty exciting, but I don’t feel any extra pressure. I think it’s kind of cool. Last year, I was playing quallies or I was last into the main draw and this year I’m in the top four seeds in most of the [Australian Pro Tour] tournaments. I think it’s a good achievement and a nice reward.”

Meanwhile, in the men’s event, Sydney’s Blake Mott continued his fairy tale return to professional tennis following a two-year hiatus, moving past second seed Brydan Klein. Unfortunately for the Brit, with Mott ahead 6-4 3-1, he was forced to retire, sending the wildcard into the final to face Vladyslav Orlov. The Ukrainian was a three-set victor over top seed and local favourite, Maverick Banes, 6-3 3-6 6-4.