Sam Stosur stands just two victories away from a fourth Grand Slam mixed doubles title after a thrilling quarterfinal victory alongside Rajeev Ram on Tuesday at the US Open. 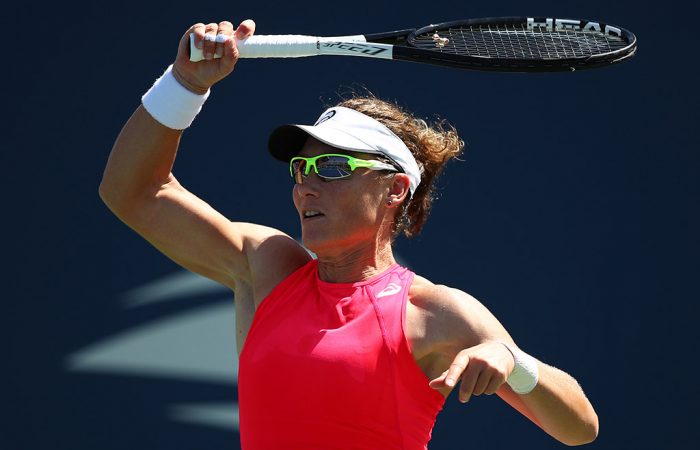 Sam Stosur is through to the final four of the mixed doubles tournament with Rajeev Ram following a thrilling quarterfinal win at the US Open on Tuesday.

Stosur and Ram, the No.3 seeds, accounted for sixth seeds Demi Schuurs and Henri Kontinen 4-6 6-4 [14-12] and will face Bethanie Mattek-Sands and Jamie Murray in the semifinals.

The Aussie-American pairing, who trailed by a break early in both sets, saved two match points in the super tiebreak before winning four of the last five points to seal victory.

“There was probably a bit of luck here and there as well in a super-tiebreak like that,” Stosur told wtatennis.com.

“Holding serve is obviously crucial, and thankfully, especially when I was serving and it was tight, at 9-8 or whatever it was, I got two good first serves in.

“I held my own and served great at that time. And then when your partner is serving, it’s just like, ‘Ok just bomb down one and you’ll be fine,’ and then you go from there (laughter). But yeah. Very close, very tense, I think everyone played really well tonight so, yeah, we got through which is great.”

Stosur followed countrywoman Ash Barty onto Louis Armstrong Stadium, after Barty and Victoria Azarenka recovered from 6-2 4-2 down to oust No.1 seeds Timea Babos and Kristina Mladenovic to reach the women’s doubles semifinals.

Stosur is a three-time Grand Slam mixed doubles champion, having won Wimbledon twice — with Bob Bryan in 2008 and Nenad Zimonic in 2014 — and the Australian Open with Scott Draper in 2005.

This is her best mixed doubles result at the US Open, surpassing the quarterfinal she reached in 2005 with Paul Hanley.

As reported by wtatennis.com, Stosur and Ram’s pairing was a last-minute one.

“I just happened to be in accreditation at the same time (Rajeev) was. He was organised to play with someone else, and she hurt herself in qualifying and had to withdraw on him,” Stosur explained.

“I hadn’t really thought about playing mixed or not here, didn’t have a partner or anything. And he’s like, ‘Hey, do you wanna play mixed?’ And I was like, ‘Uh, give me two hours and I’ll think about it.’ And then I messaged him and said, ‘Yep let’s do it.’

“So it’s as simple as that — the right place at the right time.”