US Open: Kyrgios beaten by Rublev

Nick Kyrgios goes out of the US Open with a three-set loss to Russia's Andrey Rublev in New York. 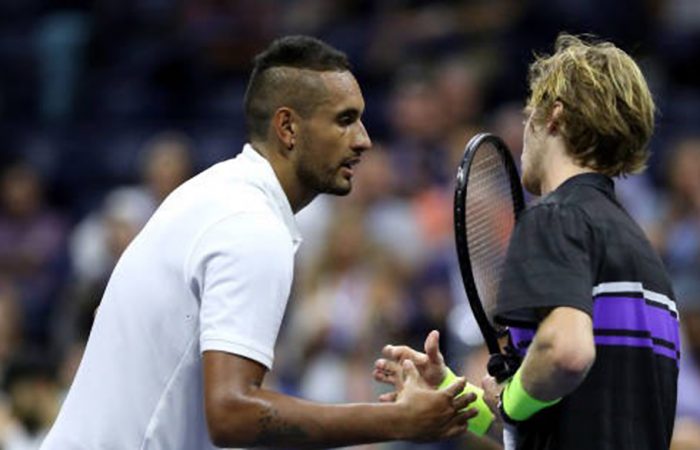 Nick Kyrgios missed out on a place in the last 16 of the US Open as he went down in straight sets to Russia’s Andrey Rublev in Saturday’s night session at New York.

“I had chances, I just didn’t take them, but he’s playing well,” said Kyrgios.

“I wish him all the best, hope he goes really deep. It was nowhere near my best tennis but it is was it is.”

Serve dominated the contest, with Rublev getting the only break in the third set after taking the first two in tiebreaks.

Kyrgios, the 28th seed, struggled with his vision in the Arthur Ashe Stadium lights and saw his best chance slip by from 4-0 up in the second set tiebreak, but Rublev came up with his best when it mattered most.

“Different conditions, obviously Ashe is a massive court,” Kyrgios said. “It took me a while to get adjusted, it was very tough to see.

“He played great tonight, was super aggressive. I never felt comfortable and that was credit to him, playing his game. It was tough.”

Kyrgios remains in the doubles with Romania’s Marius Copil – the pair play Austria’s Jurgen Melzer and Oliver Marach in round two.

Rublev goes on to face Matteo Berrettini in the fourth round after the Italian earlier defeated Aussie Alexei Popyrin in four sets.

De Minuar will play Bulgaria’s Grigor Dimitrov in round four on Sunday, while second seed Ash Barty takes on China’s Qiang Wang in the women’s fourth round.