US Open: Kokkinakis back on Grand Slam big stage

Australian tennis star Thanasi Kokkinakis will take on the great Rafael Nadal in the feature night match at the US Open on Thursday. 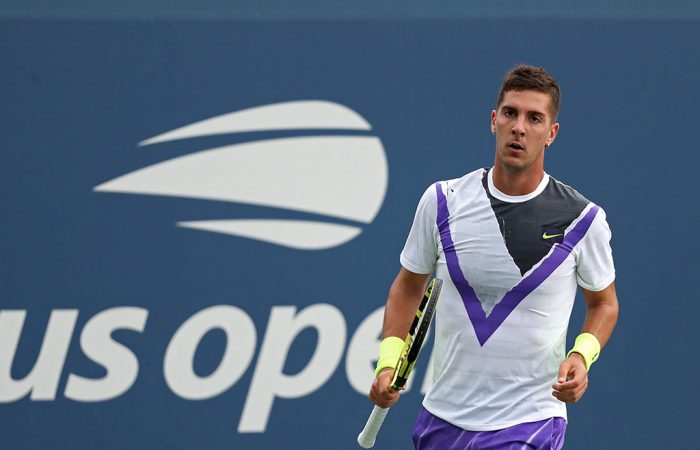 Thanasi Kokkinakis is officially back on the Grand Slam big stage after having his US Open blockbuster with Rafael Nadal scheduled as the marquee match on Day 4.

Kokkinakis will take on Nadal under the bright lights of Arthur Ashe Stadium in prime time on Thursday night (Friday morning AEST).

And the world No.203 has little time for the doubters who don’t give him a chance of toppling the world No.2 and 18-time Grand Slam champion.

AUSSIES IN ACTION: US Open Day 4

“I don’t think anyone gave me a chance when I played (Roger) Federer in Miami last year after missing so much time as well,” Kokkinakis said, in reference to his second-round victory over the great Swiss at Key Biscayne’s stadium court in 2018.

“Sometimes I think I’m a bit of a lottery, so you never really know what you’re going to get, but I think I have the game to do it.

“It’s definitely going to be tougher over five sets. He’s a hell of a player. It’s going to be a serious task for me.

“But I’m going to go out there and play my game and play aggressive and see what happens.”

READ MORE: Kokkinakis a first-round winner at US Open

Before suffering his wretched run with injury, Kokkinakis was more than competitive in his last match on one of the sport’s grandest stages.

As a 20-year-old, Kokkinakis made Novak Djokovic sweat in a 6-4 6-4 6-4 loss to the superstar Serb in the third round of the 2015 French Open on Court Philipp Chatrier.

“I feel like I can compete with these guys,” the US Open wildcard said.

If he can pull off one of the great Grand Slam boilovers, Kokkinakis will play Fernando Verdasco or Hyeon Chung in the third round.

Kokkinakis won his opening-round match on Tuesday against Belarusian qualifier Ilya Ivashka, his first main-draw win at a major tournament since that French Open campaign four years ago.