Having both enjoyed breakout 2019 seasons, Australian rising stars Astra Sharma and Alexei Popyrin will each notch another milestone when they contest their first US Opens. 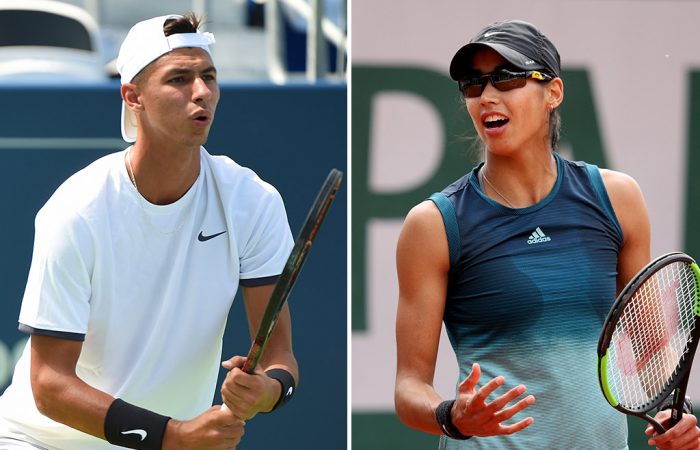 On Tuesday in New York, Aussies Astra Sharma and Alexei Popyrin will play for the first time at the US Open, continuing what has been an exceptional 2019 season for both.

The rising stars are among seven Australians featuring on Day 2 of the year’s final Grand Slam tournament, and they are arguably the two most improved.

Incredibly, this is Sharma’s first full year on tour; last year she played her final season of college tennis before graduating from Vanderbilt University.

Since January the West Australian has slashed her ranking from No.230 to 94th, and peaked at No.85 in June.

Adjusting to life as a touring pro has been an experience for Sharma, who used to juggle her tennis career with studies.

Taking on the #usopen with my vandywtennis forever frosh @Sydneyelyse17! First round match will be 2nd on after 11am on court 15! @ Flushing Meadows – US Open, New York https://t.co/MZOplbTefr

“I’m actually finding I have too much time (to myself), if anything. So (I’m) trying to pick up things like guitar and stuff on the road, which is pretty fun,” she said ahead of her first-round meeting with Magda Linette.

“You get a lot of time off court, so the challenge is now finding things to occupy yourself and being a complete professional. Taking care of things like recovery or little extra things to get better on. Definitely you have all this extra time to do stuff and be really specific with your tennis, so it is definitely an improvement.”

Thanks to her rise in the rankings — helped by a trip to her first career WTA final in Bogota in April — Sharma directly qualified for the main draw in Paris, London and New York, meaning she has played at all four Grand Slam events this year for the first time.

The 23-year-old, who won three rounds of qualifying to enter the Australian Open, has had to learn quickly how to adapt to her new position in the game.

“Most of the matches I feel are played in the off-court (space), in a sense, just (about) getting yourself emotionally ready and happy,” she said.

“If you’re spending eight, nine hours at the court just on your phone, you get burnt out pretty quick, and that ability to be able to go into your own little world or get some ‘you’ time in is pretty important, I think.”

Popyrin has experienced a similar learning curve in 2019; like Sharma, he significantly improved his ranking to hit a high of 87th in July after beginning the season just inside the top 150.

He, too, will have played in the main draw at all four major tournaments in 2019, and has so far progressed beyond the first round at all of them.

“I only experienced Aussie Open last year; I didn’t experience any other Slam. But yeah, definitely, just playing any Slam is honestly amazing and we’re all lucky to be here,” said Popyrin, who will take on Federico Delbonis in round one.

“We worked hard for it but definitely it’s great to finally play all four Grand Slams in year — I didn’t even do that in juniors, I think. So it’s a big achievement for me.”

After reaching the third round at Australian Open 2019, Popyrin went on to qualify for tour-level events in New York (indoors), Acapulco and Indian Wells (on hard courts), Monte Carlo and Estoril (on clay) and Stuttgart and Wimbledon (on grass), before advancing to his first ATP quarterfinal in Atlanta in late July.

He built a four-match winning streak at Wimbledon which was eventually snapped in the second round by 11th seed Daniil Medvedev.