Nick Kyrgios: “Hopefully I can continue on this new path”

Healthier habits, a happier outlook and renewed joy for competition all assisted Nick Kyrgios en route to his most memorable tournament title in Washington DC. 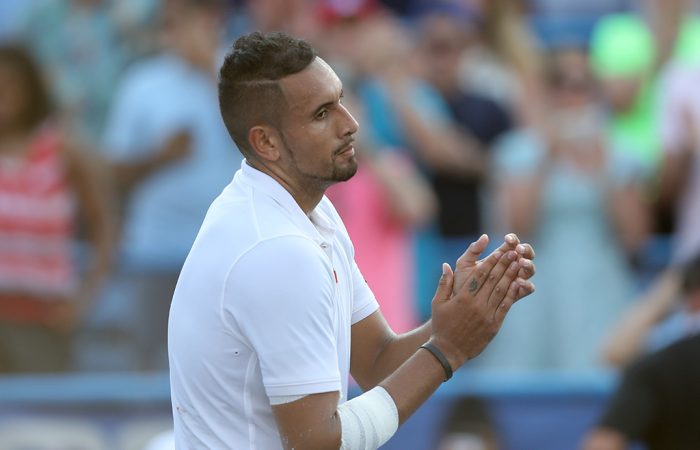 On the surface, Nick Kyrgios’ triumph at the ATP tournament in Washington DC was hardly surprising, given what the Australian has so far achieved.

He had already won two ATP 500 titles on hard courts, in Acapulco in February this year and Tokyo in October 2016. He already owned five ATP trophies. He beat several top players in the United States capital, but that was no different to what he did in Acapulco, and we already knew he elevated his game when facing the world’s best.

He served big, averaging almost 20 aces in his final three matches. He deployed a vast array of strokes and trick shots, populating the highlight reels. He entertained and interacted with the crowds. He sparred with the umpires.

None of this was new. Except, perhaps, what was occurring off the court, out of view.

Kyrgios, in a candid mood all week when undertaking his media duties, described this tournament victory as the most memorable of his career.

“How professional I was off the court, and I had the same routine every day,” he answered when asked what would stick with him the most.

This is new. And that’s because nothing about Kyrgios – whether it be his approach to the sport, his preparation for matches or his on-court demeanour – is conventional.

His oft-criticised shot selection is another element in this picture. “When I get lobbed, I think the highest percentage shot for me is to hit a tweener. I don’t like getting back and hitting a defensive lob. I think it’s very predictable,” he explained. “I mean, I can hit a lob from my tweener or I can hit it short. I can go anywhere I want, really. As ridiculous as it sounds, I just back myself.”

Also unconventional? His attitude towards the ATP rankings. “Honestly, man, I don’t even look at (them),” he said. “I believe that I can beat anyone if I play the right way. I think the ranking system is overrated. I just go out there and play my game.”

He did this all week in Washington DC. Matches were on Kyrgios’ racquet, regardless of the opponent – even if it was world No.6 Stefanos Tsitsipas or third seed Daniil Medvedev, two of the best-performed and most consistent players of 2019.

But his typically free-spirited approach on court was linked with an improved process off it. The mixture of the two proved unbeatable.

“This week has been awesome. I’m just doing the right things. I’m trying to improve on a lot of little habits, and it’s paying off. Five days in a row competing, I’m pretty happy with myself,” he said after his semifinal win over Tsitsipas, during which he saved a match point in the final-set tiebreak.

Earlier, Kyrgios had surged to a 6-4 2-0 lead, before unravelling. Yet he caught himself.

“It was spiralling out of control at one point,” he admitted. “I’ve been in that position a lot, and it’s gone even worse. I’ve been defaulted before. I haven’t competed in the third set.

“So I’m pretty happy with myself the way I tried to drag it back from a dark place and managed to hold on the first couple service games in the third set and just competed. I just left it all out there and gave myself a chance to win the match.”

It was in similarly tight circumstances that he beat Medvedev, ousting the Russian in a pair of tiebreaks after trailing 5-2 in the first one.

“Super proud (of myself). I haven’t played many matches this last couple months. Especially just looking back on some of the places I’ve been the last six months, it’s crazy to think how much I’ve turned it around. I feel like I’ve made major strides,” Kyrgios said.

“I’m just going to take it one day at a time and hopefully I can continue on this new path.”

The moment @NickKyrgios claimed the @CitiOpen title… *with a little help from a fan* 😛#CO19 pic.twitter.com/UaMwEQkoy9

In previous years, Kyrgios has won a title, or enjoyed a strong run of form, only to fall away. In 2016, he suffered a well-documented letdown at the Shanghai Masters just a week after winning in Tokyo. His stellar spring US hard-court season of 2017 preceded a lean run where he advanced beyond the second round just once in his next six tournaments.

Even after his winning week in Acapulco this year, he went 5-7 in his next 12 matches before turning things around in Washington DC.

Kyrgios is keenly aware of this inconsistency.

“I always knew that I could produce good tennis, but the problem with me was not being able to do it every day and every week. I would go missing for a month and then show up to a tournament and maybe play well,” he said.

Another thing he is keenly aware of is his position in the game as a role model – a factor driving his change in approach.

“I know deep down there’s a lot of kids that look up to me and I need to be better,” he admitted.

“A lot of people can relate to me. I have a massive following, as well. I’m playing for a lot of people out there, not just myself. Like it or not, I’m a massive role model. I’m doing all these Kids’ Days at every single tournament. They’re picking me for a reason.

“Growing up, I was a very overweight kid. Got told by coaches, teachers that I wasn’t going to be very good at what I chose to do, which was tennis, and I think people can just relate to people telling you (that) you can’t do anything, and I feel like I’m proving a lot of people wrong.

“I’ve beaten every single one of the best tennis players in the world doing it my way, and I’m never going to stop doing that, and I think people can draw inspiration from that.

“I think you don’t listen to anyone, you just back yourself and believe in yourself, and that’s all that matters.”

Russian 20-year-old Anna Kalinskaya, closing in on the top 100 after progressing to the semifinals of the WTA event in DC, flummoxed Kristina Mladenovic during her quarterfinal win with an underarm serve. “I think you knew why I did it,” she said.

“Because I was watching Nick Kyrgios. I do the same.”

Kyrgios’ victory in Washington DC was restorative for the 24-year-old, who re-entered the world’s top 30 as well as returning to the position of Australia’s No.1 male player.

“I just wanted to start being better as a tennis player and as a person,” he said.

“This is only the beginning. I’m going to continue to go through with these habits. And at the same time, I’m trying not to change myself. You know, playing ping-pong with kids before I play (matches).

“I don’t want to lose sight of who I am. I want to continue to have fun on court and be the entertainer I am. But it’s a day-by-day process.”