Former world No.220, who hasn’t played a professional match in almost two years, has rediscovered his passion for the sport. 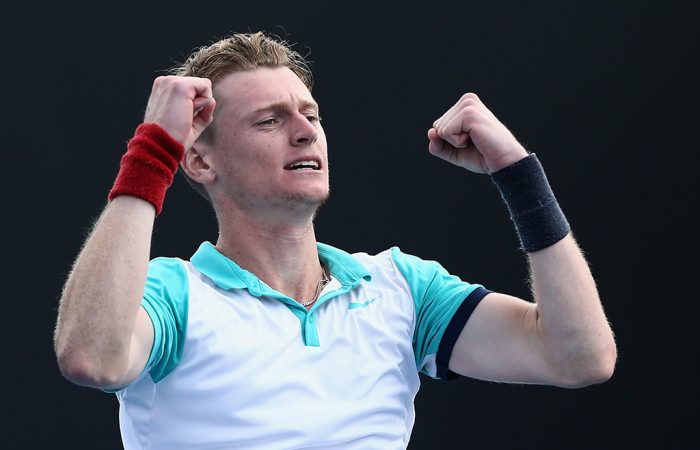 Blake Mott is targeting a return to professional tennis at September’s Australian Pro Tour tournament in Cairns after two years away from the game.

Mott, 23, revealed in an in-depth interview with SEN’s The First Serve that he would be coming back to the sport with a renewed sense of perspective.

“A lot of it is a build-up of experiencing life outside the sport, and just getting familiar with not travelling constantly, having a bit of home life, getting that consistent balance,” he told the show’s host Brett Phillips.

“But I think for me the (most significant) thing has been working with a lot of juniors, as a coach. I found a lot of passion again and a lot of drive to really be a good role model and inspire a lot of the kids that have touched me in many ways.

“If I can have the opportunity to play in another Grand Slam, I think my whole outlook would just be completely different.”

Big thank you to @BrettAPhillips, @TheFirstServeAU & the @1116sen team for having me in the show last night! Loved sharing a small part of my journey. Catch the show via https://t.co/BAUvyX3WOS pic.twitter.com/mrHd9tJGbk

Mott’s story shares some commonality with the path taken by Ash Barty, who stepped away from the sport for a similar length of time. Both born in April 1996, Mott and Barty came through the developmental pathway together and were frequently a part of the same international junior tours, forging a friendship along the way.

“I remember having a coffee with her when we were about 18, similar age when she stepped away and we were sort of relating to some of the difficulties (of life on tour),” Mott said.

“Obviously she was on a very big scale, playing Aussie Open at such an early age and having that exposure as the ‘next best thing’.

“To see her take that time away, even try another sport, it’s inspiring. Definitely had a lot of familiarities (relating her journey to what I was experiencing).”

While Mott did not attain the same heights as Barty in their respective ‘first’ tennis careers, he was nevertheless a solid touring pro who peaked at world No.220 in June 2017, having earlier that year qualified for the Australian Open to make his Grand Slam main-draw debut.

In 2016 he won his first and only title at the ATP Challenger tournament in Launceston – beating Stefanos Tsitsipas along the way – and he was a finalist six times on the ITF Futures circuit from 2014 to 2017, as well as at the Burnie Challenger in 2017.

Yet the constant grind of travelling on tour began to wear him down.

At a Challenger tournament in 2017 in Italy – where he went on to reach the semifinals – while Roland Garros was capturing the interest of the tennis world, Mott began to experience feelings of loneliness and isolation. He admitted that, by that stage, the feelings he experienced after winning matches were not all that different to what he felt after losing.

A few months later, en route to Melbourne Airport ahead of the US Open, he experienced a gut feeling telling him not to board the flight.

“Reflecting on that, it was a moment where my instincts were saying ‘mate, we need to sort some of this stuff out, we need to get to a place where you’re enjoying your tennis,’” he told The First Serve.

He did board the flight, and ultimately lost in the first round of US Open qualifying in straight sets to Marco Chiudinelli.

Exactly like Barty three years earlier, the US Open would mark his last professional outing before putting down his racquets.

“Sometimes you don’t actually stop and appreciate the moment that you’re in. You just keep applying pressure to yourself to keep continuously growing, rather than more focusing on the competitive moment.”

With his passion renewed and his focus shifted, Mott has been training at Melbourne’s National Tennis Centre since April.

Re-introducing his body to the vigorous demands of elite-level tennis, he got his first taste of competition at recent Australian Money Tournaments in Doveton and Mornington.

His plan is to be ready to go for his first professional tournament in Cairns eight weeks from now, when the Australian Pro Tour resumes.

His approach? To “stop and smell the roses”.

“I’m not really focused, especially in the near future, on anything to do with rankings. I’m really just focused on enjoying moments,” he said.

“I needed to get to a place where I really wanted to play. To keep it simple. To really want to go out there and compete. I didn’t really put a time-frame on it to come back. I just said: well, if it comes it comes, if it doesn’t it doesn’t. I’m happy to find what else is next for me.

“The low (points) I look at a lot differently now, in the sense that I feel like they are actually what make the highs so great. When you persevere through those tough times in tough places or tough environments and then you get to the moments where you do break through and have those special moments, that’s the big thing I’m chasing.”