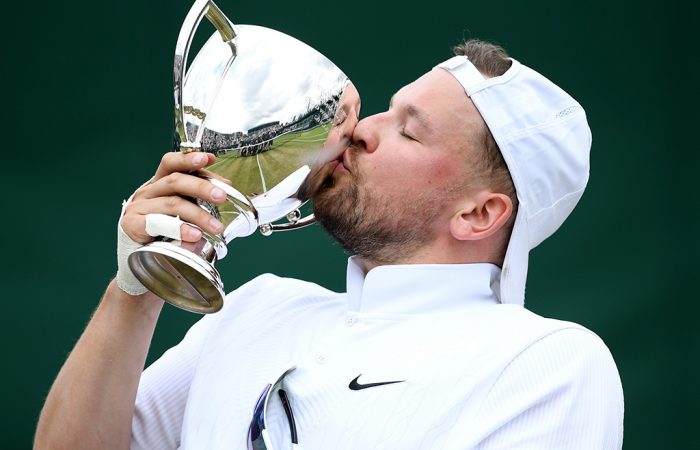 Dylan Alcott became a Wimbledon singles champion thanks to a dominant display in the quad wheelchair final on Saturday.

A day after combining with Andy Lapthorne to win the doubles title, Alcott overwhelmed his teammate 6-0 6-2 in 50 minutes on Court 12.

“I just played awesome. I was so solid, hitting winners. When I play like that it’s tough to beat,” he said.

“(When you) train, like when no one is there, you play way better. In big matches it’s hard to replicate that. (Today) I played the same as I play at home when I’m playing (my coach) Francois.

“I was just looking around thinking: we’re at Wimbledon. There was a full stadium at Wimbledon on grass watching. That was so cool, to go away (from home) and have a crowd like that.

“I think you could tell I had a pep in my step from the start.”

In addition to becoming the inaugural quad wheelchair singles champion at the All England Club, the triumph sees Alcott notch several impressive milestones.

With his ninth Grand Slam singles trophy, he now holds all four major singles titles, winning the US Open in 2018 before scooping the Australian, French and Wimbledon crowns this year. It’s a feat being referred to as the ‘Dylan Slam’.

He stretched his unbeaten 2019 record to 18 matches (12-0 in singles, 6-0 in doubles) and remains on track for the calendar-year Grand Slam.

Yet when these statistics were put to him, he found even greater satisfaction in another achievement.

“I think the thing I’m most proud of is the way we’ve personally rebranded the sport to try and get a change of perception of what people have with a disability,” he said.

“In Australia, people used to stare at me because I was in a wheelchair. Now they stare at you because you’re Dylan Alcott and know who you are. That’s like the coolest thing because they could not care that I’m in a wheelchair.”

However, when it came to his on-court accolades, one did rise above the others.

“The ‘Dylan Slam’ is cool, but no one cares as much unless you win the Grand Slam, which is all in one year,” he said.

“I put pressure on myself by saying at the Australian Open I want to win the Grand Slam. People might think I was stupid, but I was like, That’s what I want to do.

“That’s why I get out of bed every morning, been boxing, training, doing everything because I want to win that Rod Laver Grand Slam in a calendar year.

“One more to go, baby. Glad I didn’t drop the bottle here. See what happens.”

Wimbledon has proved to be a venue that brings out the best in the Alcott.

The Australian was superior to Lapthorne in every department; he served big – his speeds on several occasions approached 100mph on the IBM serve clock – and used his full repertoire of shots to win points.

Flat, stinging backhands and heavy forehands were complemented by intelligent use of the drop shot, several successful trips to the net, delicate half-volleys and knifing slice backhand returns.

He raced ahead 6-0 5-0, survived a minor wobble as Lapthorne briefly worked his way back into match, then celebrated wildly after a final winning volley.

“It was thick (grass on Court 12), hard to push. I work hard on my chair skills. That was proper grass court tennis. My coach Francois and I said, This is very Dylan,” he said.

“To be able to manipulate the ball, keep it low. Also I think variation is key on grass, same as able-bodied (tennis). You slice one, the wheelchair comes in, heavy topspin, you have to go out.

“I’m lucky that I have kind of a full range of shots that I can play. I’m not just kind of spanking it around all the time.

“I didn’t realise it suited me that well.”

Alcott admitted the inclusion of Roland Garros and Wimbledon into the quad wheelchair tennis calendar had reinvigorated him.

Previously, quad wheelchair players had just two opportunities – at the Australian and US Opens – to take part in Grand Slam tennis.

And with the lofty goal of a calendar-year Grand Slam driving him, Alcott believes this has brought out some of his best tennis.

“I don’t think I would be playing very well if we didn’t get into Roland Garros or Wimbledon,” he admitted.

“But right now, I’m loving getting out of bed and playing tennis.”