Ahead of their singles final on Saturday, Dylan Alcott and Andy Lapthorne combined to win the inaugural quad wheelchair doubles title at Wimbledon. 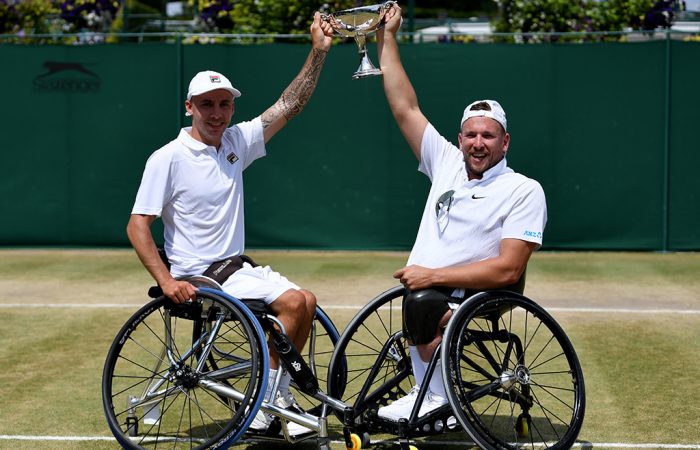 Dylan Alcott has maintained his unbeaten run in 2019, combining with Andy Lapthorne to win the first ever quad wheelchair doubles title at Wimbledon on Friday.

Playing on an atmospheric Court 14, the Aussie and the Brit combined to defeat Japan’s Koji Sugeno and American David Wagner 6-2 7-6(4) to hoist the trophy.

The first ever quad wheelchair champions at #Wimbledon@DylanAlcott and @lapstar11 beat Koji Sugeno and David Wagner to win the doubles title – and they celebrated in some style pic.twitter.com/NDmPlRmAv0

Interestingly, Alcott and Lapthorne will go from friends to foes within 24 hours when they clash in Saturday’s quad singles final.

“To Andy – thanks for playing doubles with me, brother. We’re playing in the singles final tomorrow so I hope I pump you,” Alcott said in an entertaining trophy acceptance speech.

Alcott’s win in the doubles means the world No.1 is now undefeated in 17 matches in 2019; he currently boasts win-loss records of 11-0 in singles and 6-0 in doubles.

He arrived in the singles final at Wimbledon after a 6-3 6-4 win over Sugeno in Thursday’s semifinals.