Dylan Alcott is gunning for his third leg of the calendar-year Grand Slam 50 years after Australian legend Rod Laver achieved the feat. 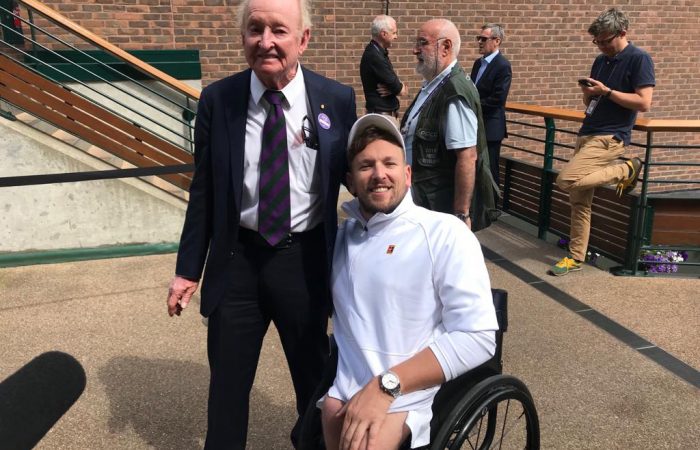 Dylan Alcott arrives at Wimbledon with double the excitement.

Firstly, there’s the thrill of playing an officially-sanctioned quad wheelchair tournament at the All England Club for the first time.

And secondly, he will be shooting for the third leg of the calendar-year Grand Slam.

In the inaugural edition of the quad wheelchair tournament at Roland Garros last month, Alcott won the event to win his second major tournament of 2019 after triumphing at the Australian Open in January.

Roland Garros was his most recent competitive outing and extended his unbeaten singles record this year to 10-0.

He chatted with tennis.com.au ahead of of his opening match at Wimbledon against Japan’s Koji Sugeno.

Tennis.com.au: You’re in excellent form coming in, especially after that win at Roland Garros…

Dylan Alcott: “I haven’t lost a singles match or a doubles match (in 2019) actually. So touching wood, hopefully the streak keeps going. I’ve been really revitalised on the training court. Especially playing these Grand Slams for the first time, it meant a lot to me. So I’ve really been working hard. Hopefully I can do everyone proud and get the job done.”

Tell us about Koji Sugeno, your opponent first up.

“His first Grand Slam was at Roland Garros. He’s the world No.4 now. He’s come up pretty late. He’s got a big forehand and he’s a great player so tough draw, but they’re always tough draws at the Grand Slams because only the top few players in the world get invited. I really don’t mind who I play, because whether it’s first round or last round, you play the best players, and you’ve got to win. So you have to play them at some point.”

How did you prepare for Wimbledon when you went home after winning the French?

“I was trying to jump on the grass at Kooyong and Royal South Yarra, but bloody Melbourne, it was too wet (laughter). So I’ve been training at home on hard court. You can’t do much about it. But I was excited to get over here and start playing on the grass. Because obviously you need to get time on there. It’s been going well.” 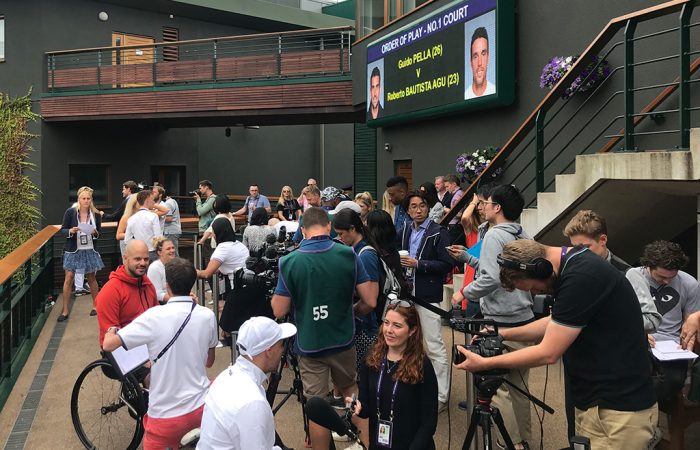 It’s always been important to you to increase the visibility and coverage of wheelchair tennis. What do you make of the amount of media here to preview the wheelchair events?

“It’s incredible to see this kind of interest in wheelchair tennis. Especially at Wimbledon. This is the first time my quad division has been a full included tournament with the singles and doubles. There’s been some wheelchair tennis here but not the full monty, as I’m calling it, because we are in the UK. I’ve had some success back home in I guess normalising Paralympic sport for people to realise how entertaining it is and that just to show people want to watch. Look how much media is here – it’s unbelievable. That’s what I always wanted, so to see it come to fruition means so much to me. It was so humbling when I won Roland Garros – there were like 300 news articles about it. Five years ago, you begged to get one.”

“I think a few things. We’ve worked hard to campaign for it, but when you get to play on Rod Laver Arena in front of 8,000 people and one million people watch it on TV, you can’t tell me that people don’t want to watch. And I think the other Grand Slams saw that, saw what we did at the Australian Open, and went: we want them to play at our tournament as well. And as a result of that, bang, we’re here. I can’t thank Roland Garros and Wimbledon enough for including us. Also, to have the opportunity to go for the Grand Slam is something that’s pretty special to me. Rod Laver and I spoke about it; I’ve won two, got two to go. It’s added pressure on myself, but I don’t care – I’m really excited.”

Great to finally be at the home of tennis with the original greatest of all time! @rodlaver @wimbledon #wimbledon pic.twitter.com/LA5TzlQbx5

You’re familiar with that pressure, given how in 2016 you were open about how much you wanted to win double gold at the Rio Paralympics. Does that make it easier for you coming here?

“I don’t think it makes it easier, but it definitely puts the goal there and I always think about it. I want to win this week (at Wimbledon) but I really want win that Grand Slam. And if I don’t win this week, I don’t win that Grand Slam. So I like putting that pressure on myself, because it makes me work harder. And it also shows me how much I want it, I guess. Cannot tell you how much I love pulling the whites on – I think I look crisp as. I love being here. Imagine being able to win that Grand Slam like Rod Laver did? 50 years on. It’s unbelievable.”

In between the French and Wimbledon you also won a Logie?

“I must say it was a big honour winning that Logie. Representation on TV was important to me and to win a Logie for best new talent is a big deal. I was shocked, because when I won the Australian Open, I’m like, that’s my job. But my partner Chantel and I were there and we kind of were shocked: you just won a Logie, what the hell? (laughter) It’s sitting on our coffee table, we look at it every day and start laughing. So it was a pretty cool thing to have.”

That acceptance speech you made on stage at the Logies was so emotional. What’s been the response to that?

“The speech has got millions of views online all around the world. I meant what I said. I hated having a disability and I hated when I turned on the TV and never saw anyone like me. That was one of my motivations to get on TV. And then when I did it, and I wasn’t bad at it, and I got opportunities – whether it was through the tennis broadcast, or my work on The Set and Invictus Games, which I wont the Logie for. To get voted by the public and your peers as best new talent was pretty cool.

“It was nice to get up there and do a heartfelt speech where I just kind of said what I felt, and the response from the TV industry, but also the public, was pretty epic. But also, from the disabled community, who go: ‘Yes! Like I feel that too, and I’m really glad you said that’. Hopefully more people get opportunities like I’ve had. Whether that’s in TV, employment. dating, just everyday life. They deserve the opportunities that I’ve had.”

Last year when you were here for the Wimbledon quad wheelchair exhibition event, you said that with all the projects you were juggling, plus your tennis career, you were barely sleeping. Have you struck a better balance this year?

“I’ve got a great balance. I’ve got a better extended team around me now that help me. My partner Chantel and I started dating at the start of the year. And I’ve started putting time away to do things that we want to do, and look after myself a bit more. And I actually perform a lot better on the tennis court when I do that. Because I’m a happier person. It’s been great. I’ve really prioritised my tennis and I kind of block out 8am-12pm every day to train. And whether it’s a speaking going, TV, radio, whatever, I tell everyone I can’t do it then because I’ve got to train, and they need to work around my schedule. And it’s great. Mate, I’m really happy – the happiest I’ve ever been. And I’m loving it. I think that translates onto the tennis court as well.”

After Wimbledon, what is your schedule for 2019?

“I’m being one of those Grand Slam divas; I just play the Grand Slams and a few others (laughter). I’ll play US Open, we’ve got end-of-season Masters as well. Tennis is my main priority, definitely for the next 12 months until Tokyo 2020. That’s my goal. But to get that Rod Laver Grand Slam, I like to call it, is the big thing, so I’ll be doing everything in my power to hopefully win here, and the US Open as well. 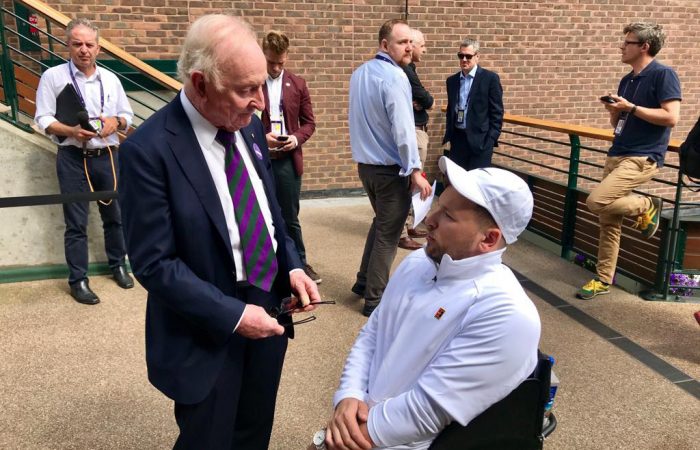 “I can’t thank everyone at home enough for all their support, because everyone really gets around me now, and it’s quite humbling. It means a lot. To see Ash win; Australian tennis is really thriving. And to be a part of that really does mean a lot to me, and I really am loving it.