Into the third round of the Wimbledon women's doubles event with Victoria Azarenka, Ash Barty withdraws due to a recurring arm injury. 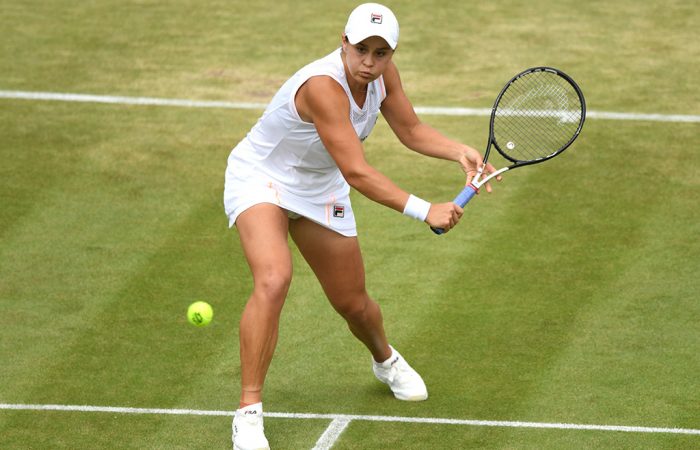 Ash Barty is refusing to blame her gruelling workload for a fourth-round Wimbledon loss to unseeded American Alison Riske.

Barty withdrew from the women’s doubles citing an arm injury following her 3-6 6-2 6-3 defeat to Riske on Monday, but declined to use the issue as an excuse.

As well as nine singles matches in three weeks since her breakout run to French Open glory, Barty has had four doubles outings despite pulling out of the pre-Wimbledon doubles event in Birmingham with bone stress in her serving arm.

The 23-year-old was asked after her loss to the 55th-ranked Riske if overloading her schedule with doubles at the Grand Slams sapped her energy levels.

“A lot of the time, not just in Grand Slams, but on weeks during the tour as well, it’s all about making sure my body is healthy, my body is right.

“I think when my body is healthy, when I’m feeling good, I would love to play doubles and I’d love to continue to play as much doubles as I can.

“Sometimes you really have to listen to your body and peg it back a little bit to try to give yourself the best chance in singles.

“I certainly loved playing with Vika this year.”

A winner of last year’s US Open doubles title with American CoCo Vandeweghe and a four-time major finalist with compatriot Casey Dellacqua, Barty had been set to play fourth seeds Danielle Collins and Bethanie Mattek-Sands on Tuesday for a place in the quarter-finals.

Instead she will head home to “rest and recover” after her phenomenal European summer season.