Querrey too strong for Millman at Wimbledon

In-form Sam Querrey, a Wimbledon semifinalist in 2017, ends John Millman's campaign on Saturday in the third round. 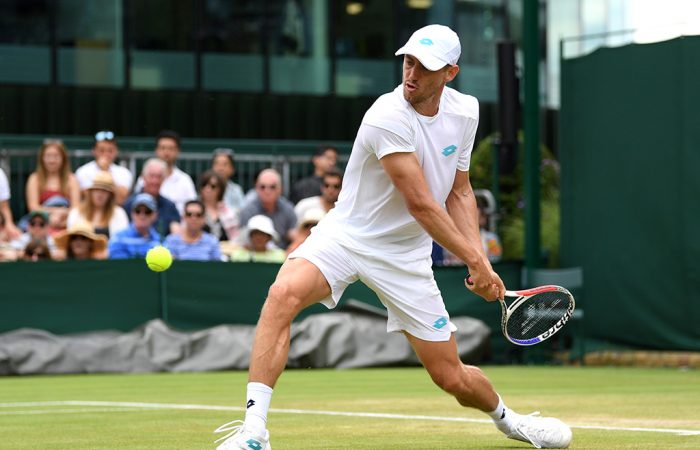 John Millman’s Wimbledon campaign ended on Saturday after a straight-sets loss to American Sam Querrey in the third round.

The Queenslander fought hard, as is customary, and earned two set points in the second set tiebreak before slipping to a 7-6(3) 7-6(8) 6-3 defeat on Court 17.

Querrey belted 27 aces among 52 winners to advance after one hour and 53 minutes.

“When you are playing against someone like Sam you definitely know that (there will be fine margins) going in. I had my chances, especially in the opening two sets, and couldn’t quite capitalise and that is the disappointing thing,” Millman reflected.

“But that’s tennis. You win some you lose some, but it has still been a nice tournament for me.”

Querrey goes on to a fourth-round meeting with Tennys Sandgren.

But Millman leaves the All England Club with confidence restored after two straight-sets wins to reach the last 32 – the first, over Hugo Dellien, which snapped a five-match losing streak.

Millman’s subsequent 6-3 6-2 6-1 win over No.31 seed Laslo Djere saw him equal his best showing at Wimbledon, after he also reached the third round in 2016.

“I was happy throughout the tournament with the mindset I brought and that is what I have been proud of,” said Millman, who is projected to rise two places to world No.62 when the tournament concludes.

“I’ve been known throughout my career for being a tough competitor and I couldn’t have tried any harder in the three matches I played.

“I really engaged and battled and I know if I bring that into the American hard court swing I am going to get results as I feel I will get results.

“This tournament was really important for me in turning around a couple of tough draws I have had and getting some momentum back.

“I would have love to have gone deeper but at the end of the day I was one of 32 men remaining in the draw and I can be proud of that.”

Millman began the match brightly against Querrey, who came into the match after reaching the Eastbourne final and with wins in six of his past seven grass-court matches.

The Australian broke serve in the fourth game to lead 3-1, but couldn’t capitalise, throwing in a forgettable fifth game which ended with a double fault and which saw him get broken straight back at love.

Querrey’s superior weaponry helped him dominate the subsequent tiebreak, but Millman contested the second tiebreak more closely, earning two set points when receiving at both 5-6 and 7-8.

The quality of tennis the American produced to save both was noteworthy; Querrey erased the first set point with a winning volley, and the second with an ace.

When Millman missed a forehand down the line on Querrey’s second point, the 2017 Wimbledon semifinalist had stretched his lead to two sets to love.

And with his confidence rising, he broke Millman in both the seventh and ninth games of the third to secure victory.