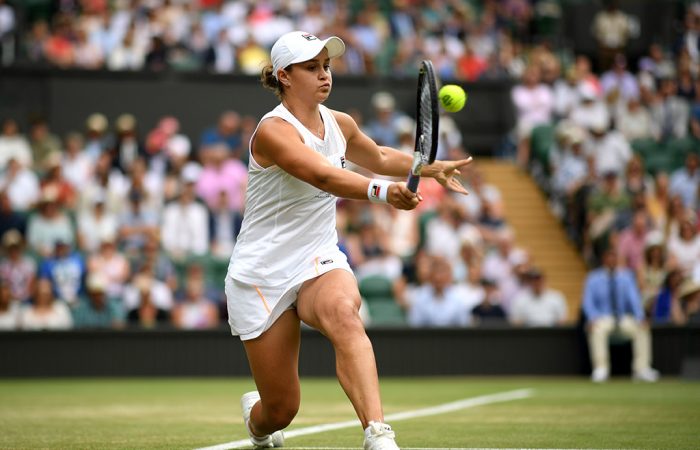 Ash Barty made a brilliant Wimbledon Centre Court debut in singles on Saturday, thumping British wildcard Harriet Dart to reach the fourth round.

Barty advanced to the second week of the Championships for the first time in her career following a 6-1 6-1 victory in 53 minutes.

On Monday, Barty will take on Alison Riske, who recovered from 0-3, 0-40 down in the third set to beat No.13 seed Belinda Bencic, for a place in the quarterfinals.

No.1 Ash Barty makes it 15 wins in a row after defeating Harriet Dart, will face Alison Riske, who came back from 0-3 in the 3rd to defeat No.13 Belinda Bencic.

Barty is undefeated on grass this season.

One to watch on Monday. #Wimbledon

Determined to soak in the experience as she entered what she describes as “the most beautiful court in the world”, Barty entered the arena with tennis legends Rod Laver, Martina Navratilova and Billie Jean King watching on from the Royal Box, joined by a host of British sporting luminaries.

And in their presence, Barty excelled.

The Australian showed off her complete repertoire of shots throughout the fast-paced match, at different times producing aces, forehand winners, backhand winners – both sliced and double-handed – plus drop-shot and volley winners.

While the crowd were behind their British hope, they could not help but marvel at Barty’s command of every stroke.

Here’s Ash! The world No.1 arrives on Centre Court @Wimbledon for her third-round match with Harriet Dart. #GoAussies pic.twitter.com/z4vDU1N528

“I think for me sometimes I look at a shot, I play a shot, I think the seaweed is always greener in someone else’s lake. I try and think of how else I can win the point,” Barty smiled.

“I just need to go about it, be really simple, make up my mind, pick my spot, hit it, and try and bring a very simple mindset and have this real clarity around how I want to play, but also knowing I have the ability to adapt and play a different shot if I need to.

“I love to hit my slice. Over and over I say that. I think that’s the shot for me that I can control the match, I can control the tempo when I use that shot. I can use it in different ways, either offensively or defensively.

“I think when I’m really clear and I’m sharp and able to use that shot how I want to, I feel like I’m in control most matches.”

Electrifying from the world No.1 ⚡️@ashbar96 is the first Australian woman to reach the fourth round at #Wimbledon since 2010, beating Harriet Dart 6-1, 6-1 in 53 minutes pic.twitter.com/YpX0MzWhGs

That shot elicited a shriek from Dart as it skidded onto her racquet too viciously for her to handle in the third game; it was part of a chip-and-charge play from the Aussie, who went on after that winning point in the fourth game to break serve second time and extend her lead to 4-0.

Dart got on the board at 1-5, but in the following game, Barty belted two aces – the second on set point – to take the opener in 25 minutes.

The second set was almost an exact replica of the first, except Dart won the fifth game rather than the sixth.

The Australian again used her serve to dominate – she ended the match with 11 aces – and simply had too much power, poise and precision for her overwhelmed opponent, who pushed a backhand wide to end the match.

The only time Barty faced a stern test was when she trailed 0-40 in the sixth game.

But from there, she played a backhand slice winner, slammed an ace out wide, and then forced an error with a powerful off-forehand to erase all three break points. She saved a fourth with another forcing forehand, then cracked another ace before volleying a winner to hold serve.

It was impressive stuff.

“It’s always nice to have quick matches. I think it’s nice to know that I can go in and execute and get my job done,” Barty said.

“In saying that, as well, a lot of my matches haven’t been as easy as the scoreline suggests. I think there have been some really tricky moments.

“I think I got better as the match went on, which was really pleasing. It was really important for me to get out of that 4-1 game from 0-40. In that stretch of seven or eight points after that, I played some of my best tennis.

“I think the best thing is that I didn’t let up the whole match. I kept the foot down and I was able to stay in control of most games.”