He may have lost in the second round of Wimbledon on Wednesday, but it's been an extremely impressive month on grass for the ever-improving Alexei Popyrin. 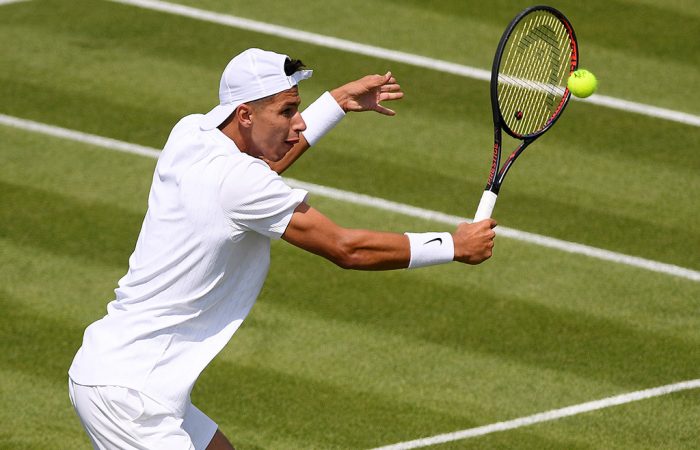 Alexei Popyrin’s Wimbledon run may have come to an on Wednesday, but the Australian teenager was in a relatively high spirits following another impressive showing at Grand Slam level.

The 19-year-old began the tournament in the qualifying rounds and built a four-match winning streak before falling to Daniil Medvedev, the No.11 seed, in four competitive sets.

RELATED: Popyrin, Tomljanovic fall in second round at Wimbledon

He has now won main-draw matches at all major tournaments so far in 2019 – going as far as the third round at the Australian Open – and is projected to rise to a career-high ranking of No.89 when Wimbledon concludes.

Popyrin, who completed the grass-court season with six wins in nine matches, reflected on another positive stepping stone in his journey up the tennis ladder.

He continues to gain experience

Popyrin won two matches to qualify for the ATP tournament in Stuttgart and also appeared in qualifying at Queen’s Club before heading to Roehampton.

These events marked his first competitive outings on grass since Wimbledon juniors in 2016.

“That’s what I said coming into the grass-court season, is that I’m only playing to get wins, to try and get wins, to try my best, but also just for the experience. And I think I got that during this month on grass,” he said.

“I’m still 19 and still outside the top 90 right now. So there’s a lot of work to be done, but that’s something I’m looking forward to; that hard work.”

He learns from his losses

Popyrin said there was plenty to build on following his loss to Medvedev, where he led 3-1 in the third set before the Russian wrested control of the match by winning 16 of the next 18 points.

When asked what he might do differently if he could play the match again, Popyrin replied: “I would say try keep emotionally stable throughout the match. I had high moments. I had a couple of low moments. Second set, very low moment. And then after I got the break in the third set. Just try and keep my head, consolidate the break.

“I had a bit of trouble consolidating breaks throughout this year. It’s something I know I have to work on and it’s something we will work on. It comes with experience. Even though I lost in Queen’s last week, I learned a lot. Tough conditions; windy, slippery and I learned a lot from that and it paid off this week.

“I learned a lot from the match I just played, and I’m just gonna take it back out on the practice court and try and get better.”

He needs to re-set his goals

During the Wimbledon qualifying week, Popyrin rose to world No.99, meeting the goal he’d set at the beginning of 2019 of cracking the world’s top 100.

When told he would set another career-high ranking of No.89 after Wimbledon, Popyrin was pleased. “OK, I like that,” he smiled. “It’s what we strive for, what we improve for, what we work for, just getting that ranking better every time and just keep chipping away at the rankings, trying to get to that No.1 spot. Hopefully I can do it.

“One of my goals, that I set for myself at the start of the year, was to try and get directly main (draw) into Wimbledon. Didn’t happen. But US Open it’s probably gonna happen, if everything goes to plan.

“Definitely (have to re-set my goals). But I’ll do that after I come back from my holidays (laughter).”

It was impressive how Popyrin quickly chose to focus on how he had won four straight matches at Wimbledon – and qualified for the main draw at a major event for the first time – rather than dwell on a defeat.

The fact he genuinely challenged a player on the brink of the world’s top 10 on the grand Wimbledon stage gave him plenty to feel optimistic about as the season continued.

“I qualified for Wimbledon – dream come true. And then getting past the first round, what’s not to enjoy?” he said.

“I’m probably not enjoying the loss right now a little bit. But I’m happy with the way the last month has gone, honestly.”