Astra Sharma and Daria Gavrilova fell in straight sets to seeded opponents on Day 1 of the 2019 Wimbledon Championships. Both Astra Sharma and Daria Gavrilova received tough first-round draws at Wimbledon, and both Australian women exited within minutes of each other on Monday.

Sharma took on 27th seed Sofia Kenin, the recent WTA Mallorca grass-court champion, and although their were some bright spots for the West Australian in her Wimbledon debut, she went down 6-4 6-2 to the American in 65 minutes.

Gavrilova found eighth seed Elina Svitolina too tough in a 7-5 6-0 loss in the All England Club’s intimate arena of Court 18.

In a battle between two players who have struggled with injuries in 2019, the Ukrainian advanced to a second-round meeting with Russia’s Margarita Gasparyan.

Sharma appeared to take some time to adjust to the slick lawns of Court 14, with the rock-solid Kenin scoring an immediate break and skipping out to a 3-1 lead.

Although Sharma settled into the contest, one break was enough for the consistent Kenin, who took the opening set.

She broke early in the second set as well, and Sharma began to look dispirited against her increasingly confident opponent. 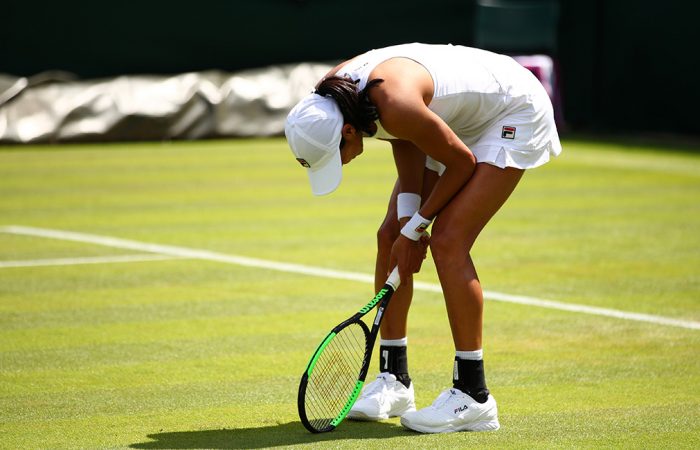 Kenin, who beat Serena Williams en route to the fourth round at the French Open, broke Sharma again in the seventh game and served it out in the next, and was helped by the Aussie’s error tally, which rose to 21 by the end of the match, versus just nine winners.

“It was a really great experience. She played pretty well but at the same time it was pretty close, it was first game break in the first set and that’s kind of what decided it. And in the second set I just thought like there were a few points here and there, areas where if I was five or 10 per cent better, that today would have been a different match,” Sharma reflected.

“But she played really well and she’s obviously a really smart, crafty player.

Sharma said she was somewhat conscious of the occasion given her debut at Wimbledon followed on from several other recent firsts, like cracking the top 100 and making her first appearance at Roland Garros.

“But I think it’s more just the other players would feel more comfortable. It’s not that I don’t feel comfortable … to be honest I didn’t feel like I was that distracted today; I was actually pretty focused on what I have to do. She was just very comfortable here and it showed.

“Hopefully next time around I’ll be a bit more settled and comfortable. But at the same time I’m very pleased with how everything’s turned out and a lot of work to be done before US Open but I’m confident that I can come out there and have a better showing.”

For Gavrilova, the match slipped away after a competitive first set.

The Australian, managing chronic Achilles tendinitis and plantar fasciitis, ignited the crowd when, after being down a break, she broke the eighth seed back to level the opening set at 5-5.

But it would be the last game she would win.

Svitolina – who has battled a knee injury in 2019 and missed six weeks of competition after Miami – broke again in the very next game and served out the opening set after 44 minutes, before racing through the second set in just 21. 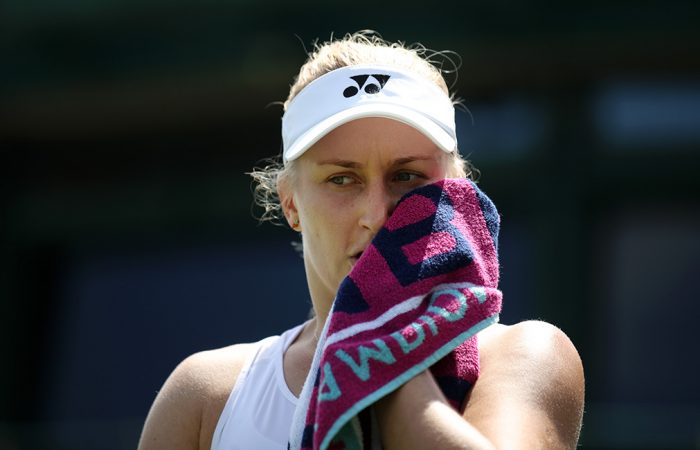 Gavrilova was in a candid mood after the match, admitting her physical struggles had taken their toll mentally.

“Definitely lack of confidence, I already don’t have much to fall back on because I have not been winning a lot of matches and because of injuries I have not been training as much,” she explained.

“I think a few times during the first set I copped out of a few rallies and went for a bigger shot than normal, where normally I’ll just grind and make my opponent miss. But that’s not what I’m doing right now.

“I’m trying. I’m doing all the right things but right now I think maybe there’s a bit of lack of… I don’t know. I’m not in a good headspace right now.

“I did think I could win that before the match and I think I’m struggling mentally and this is what it came to.

“Especially in the first set, I felt that I was dictating and I was the one making errors. But then I got really nervous from 5-all, hit two double faults in one game and didn’t win a game from then.”