Thompson on the brink of first ATP final

Jordan Thompson's semifinal against Richard Gasquet at the Libema Open has been delayed by rain. 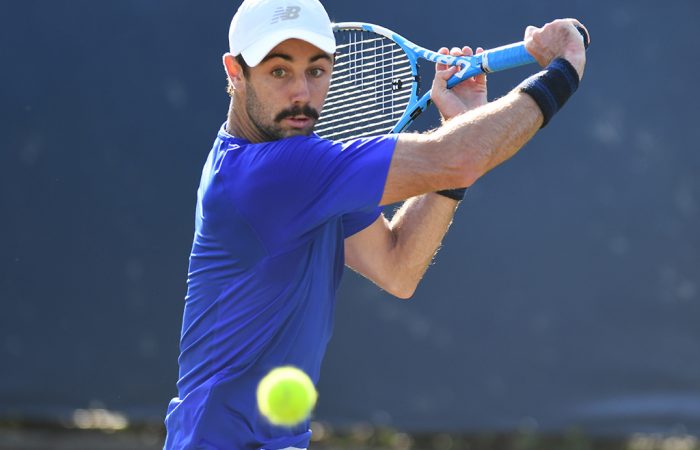 Thompson is one game from a first ATP final; Photo: © Libema Open

Australian Jordan Thompson is on the brink of his first ATP final but rain has delayed his run to Libema Open final in the Netherlands.

The 25-year-old was up 7-5 5-3 against the defending champion Richard Gasquet when the match was postponed in ‘s-Hertogenbosch on Saturday.

The Australian No.4 will return to the Court 1 with his French opponent at 11am (7pm AEST) on Sunday.

The other semifinal between second seed Borna Coric and Adrian Mannarino was suspended during a final set tie-break.

Coric had won the first set 6-4 with Frenchman Mannarino taking the second 6-3 to force a decider.

Mannarino will resume against Coric on Centre Court ahead of the WTA event final.

In London, Bernard Tomic slumped to a 6-4 7-6(3) defeat to Alejandro Davidovich Fokina, a 20-year-old claycourt specialist with just once previous win on grass to his name.

Currently ranked 88th in the world rankings, the Australian will now drop out of the top 100 on Monday.

He is also in danger of missing out on automatically qualifying for Wimbledon next month, for the second successive year, after going down to the world No.130 from Spain.

There was also disappointment for exciting 19-year-old Alexei Popyrin who lost a hard-fought three-set clash to the gritty Roberto Carballes Baena, the world No.73 from Spain.

The draw for the event saw Nick Kyrgios pitted against left-hander Adrian Mannarino, while Australian No.1 Alex de Minaur will face a yet-to-be-decided qualifier.

In Nottingham, Aussies Ellen Perez and Arina Rodionova continued their fine run with a dramatic 4-6 6-4 14-12 win over Xenia Knoll and Vera Lapko in the doubles semifinals.

Thanks to our Aussie supporters for the 🇦🇺 ! Into the finals here in Nottingham 💪 🌱 #robinhood pic.twitter.com/ouWKbDjrRm