Ash Barty is closing in on a first Australian singles triumph at the French Open in 46 years after surging into the quarterfinals at Roland Garros. 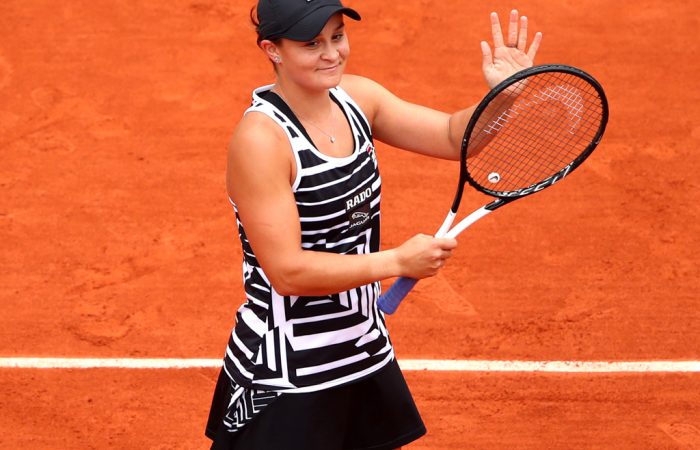 Barty showed grit and poise on Monday to end the giant-killing run of unseeded American Sofia Kenin – the third-round slayer of Serena Williams – 6-3 3-6 6-0 in a fluctuating last-16 encounter.

Barty next plays Madison Keys, the American 14th seed who is bidding to reach the last four in Paris for the second-straight year.

“But for me, nothing changes. Very much we go through the exact same process after a match. Whether it’s a win or a loss, it’s the same recovery, same everything.

“I think that’s probably what I’ve been doing best over the last 12 to 18 months. And it’s put me in better positions. I’m in these positions now because I’m doing that better.”

Back to back Slam quarter-finals.

Barty overcame the disappointment of dropping her first set of the tournament to subdue her free-hitting but temperamental opponent in one-and-a-half-hours.

“I didn’t really get too many looks at second serves until that game up 5-3, but I felt that was a really important game to try and get a little bit of momentum going into the third. And then tactically in the third set, I was much smarter and sharper out there.”

Provisionally set to climb into the world’s top five after clinching an equal tour-best 28th victory of the year, Barty prevailed over the 35th-ranked Kenin with 11 aces and 25 winners.

“It’s amazing what she has accomplished here,” Laver told a media conference at Roland Garros.

“A couple of years back, she was a good doubles player and played some attractive singles.

“But something happened. She says, ‘I know how to win matches now’, and that’s what Barty has accomplished this year.

“It’s more confidence than anything else. With confidence, you can make anything happen.”

In matching her charge to the last eight at this year’s Australian Open, Barty is also only the fourth Australian woman to make the quarterfinals at Roland Garros since Court’s fifth title win 46 years ago.