Thanks to a commanding display of tennis from Ash Barty, Australia now stands just one rubber victory away from the Fed Cup final. 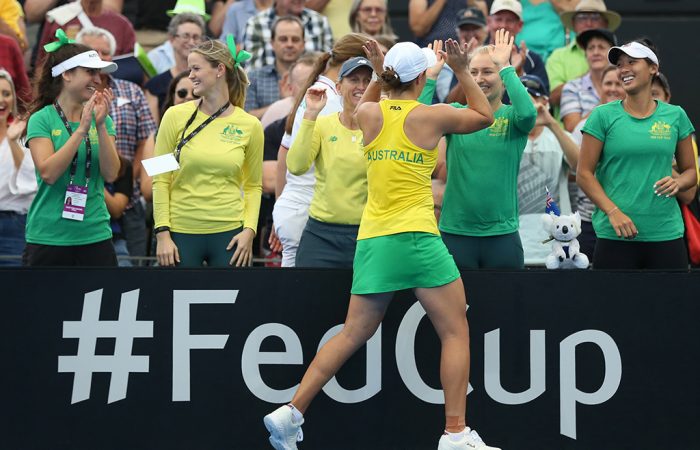 Ash Barty put Australia within one victory of the Fed Cup World Group final after dismantling Aryna Sabalenka on Sunday – only for Victoria Azarenka to level the tie.

In the first of the reverse singles rubbers, world No.9 Barty overwhelmed 10th-ranked Sabalenka 6-2 6-2 to put the hosts 2-1 up in Brisbane.

Azarenka then pummelled Sam Stosur 6-1 6-1 in under an hour to send the tie to a live doubles rubber at Pat Rafter Arena.

The former world No.1 was in a ruthless mood, committing just seven errors in a rock-solid performance to extend her winning head-to-head record over Stosur to 10-1.

Barty and Stosur will now team up and face Azarenka and Sabalenka.

Barty and Sabalenka battled hard in the early stages of the first set; the first game extended six minutes and the first five games lasted 25 minutes.

But it was in that fifth game that Barty scored the first break of the match and from there, the dynamic of the match completely changed.

“It was a bit of a wrestle early in both sets. I think it was important for me to hang with her physically and try and continue to build pressure,” Barty said.

Will we be seeing Ash back on court today?" asks @samgrothtennis.

Barty raced through five straight games to take the first set against a flat Sabalenka, who appeared to be feeling the effects of her near three-hour match against Stosur the previous day, frequently pulling the trigger too early in rallies and appearing slow to react to Barty’s shots.

The opening stages of the second set were also extremely competitive, but in a carbon copy of the first set, Barty broke in the fifth game when Sabalenka’s game unravelled in errors.

The Australian would not lose another game.

“We had a really clear plan today. We were able to have a look at a few different things that Sam was able to expose yesterday, and I was able to take advantage of it today,” said Barty, who is currently riding a nine-match winning streak.

“I thought it was really clean – particularly on return games.

“Probably over the last nine matches – through Miami and the last two days here – has been really really solid tennis.”