Despite a rocky start to the season, Daria Gavrilova is thriving in her return to the Fed Cup team environment and is drawing inspiration from her decorated teammates. 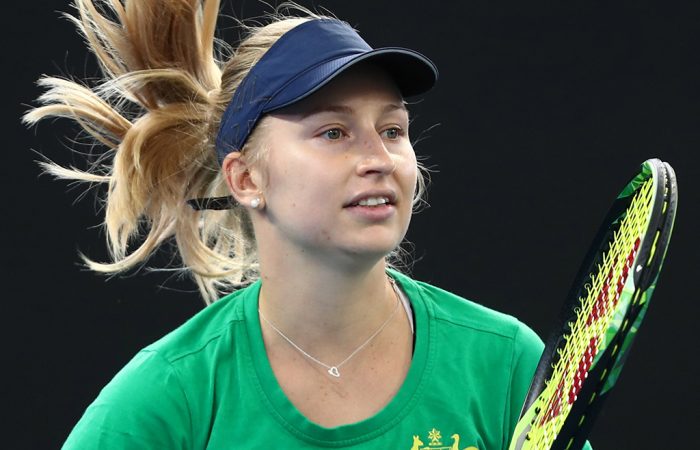 After a challenging beginning to the 2019 season, Daria Gavrilova believes she’s back on track – and she has her Fed Cup teammates to thank.

The 25-year-old this year has battled a foot injury and has struggled to notch wins, with her best result being a third-round run at Indian Wells.

> Get your Fed Cup semifinal tickets!

Yet Gavrilova has been unrestricted physically this week in Brisbane as she prepares for Australia’s semifinal against Belarus, and points to the supportive atmosphere within the Australian team for helping her better manage the emotions that come with setbacks.

“I was meant to play a few more tournaments in America but I had to have some time off to heal a few things. The season hasn’t started well, but I feel like I’m improving,” said Gavrilova, who is 2-8 in 2019.

“I think it’s hard (coping with injuries); sometimes there’s day where I struggle with it. But having the team here helps a lot and knowing that everyone is supportive. So I’m gonna take that into my next tournaments when I go away on tour.”

Gavrilova says Fed Cup weeks are some of her favourite throughout the tennis season.

Before arriving in Brisbane, teammate Priscilla Hon took her fishing. And now that she’s here at Pat Rafter Arena she has been reunited with more good friends in Sam Stosur and Ash Barty, who are a constant source of inspiration.

“I’ve always been close with Sam and she’s been my role model for a long time. Sometimes I get emotional on court and she would comfort me and have a good chat,” Gavrilova revealed.

“And it amazes me how well she (Barty) deals with the Fed Cup pressure. Sometimes I’m like, how do I do that?

“We’re really good friends off the court. We like to go out to dinners. Whenever we’re on tour, some girls from other countries would be like, what do you do at Fed Cups? And they can’t believe we do everything together. And I think it’s really special.”

Should Gavrilova be selected to take to the court against Belarus, she will look to continue building on a solid Fed Cup record that has seen her win two of her last three rubbers.

"I think Australians are very fair. Sometimes we feel like, oh, why are they clapping for them? (Laughter). That's not…

That includes her decisive singles win over Netherlands in Wollongong at this time last year, a victory that put Australia ahead 3-1 and which vaulted the green-and-gold into the 2019 World Group.

“We are training really well. We got here on Monday so we’ve had a few days of training and feeling the courts good. We’re very familiar to these conditions, so we’re really excited,” she said.

“Representing Australia, especially at home, it’s such a great feeling.”