Sam Stosur had words of support for young Australian Astra Sharma, who has risen to the brink of the top 100 playing a game reminiscent of the 2011 US Open champion. 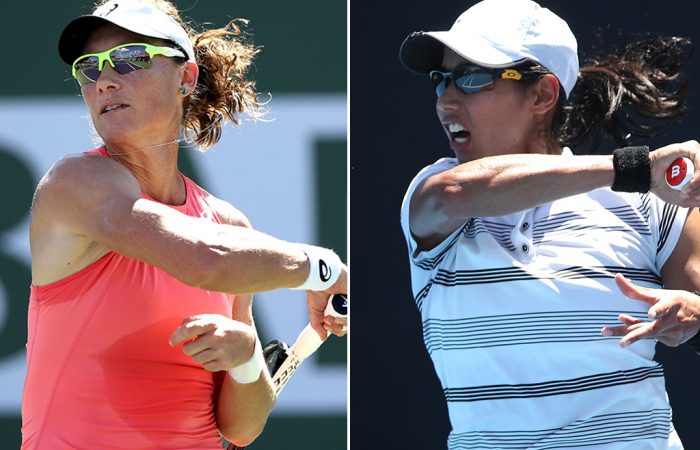 Astra Sharma’s trip to the final of last week’s WTA tournament in Bogota has caught the eye of fellow Australian Sam Stosur.

STOSUR: Fed Cup can bring out the best in me

And she has noted Sharma’s rapid rise in 2019 with interest.

“I saw that she made the final in Bogota and had some good wins along the way; first tour final is always an exciting moment,” Stosur said.

“And now she’s what, 102 in the world? She’ll probably make main draw of the French now, probably. So yeah, what a step up from college a year or so ago.

“I’d like to get to know her more, because I’ve never practised with her or anything. But now that she’s doing what she’s doing (on tour), I’ll be seeing a lot more of her, which will be great.”

In an interview late last year with tennis.com.au, Sharma identified Stosur as an inspiration.

The two women play a similar brand of tennis, with Sharma’s kick serve and topspin forehand wreaking havoc on the clay of Bogota in much the same way Stosur’s game translates so well to European red clay.

“Definitely we both have that heavy game. I loved watching her when she was doing so well at the US Open that year (in 2011). She was someone I kind of looked to as well, getting that spin, that heavy ball, because not many girls play like that,” Sharma said.

“I think (my game developed) probably because I hit a lot with my brother, and guys hit with a lot of spin, and I just naturally, to counter it, was hitting with a lot of spin back. I always practised with him growing up.”

Like Sharma, Stosur hit regularly with her brother when she was growing up, and was flattered to hear that Sharma looked to her as an example on tour.

“That’s lovely, whenever anyone says they kind of try and mould their game (in your style). If you’ve had that kind of impression on someone who then makes it and wants to play sort of similar tennis, that’s just something that’s kind of cool,” Stosur said.

“She’s obviously got a great physique and looks super athletic – that in itself is cool to watch in someone because you think, if you have that athletic ability, you’re gonna be pretty handy around the court.

“For someone like Astra, who’s been through the college system, to now make that transition so quickly, is really promising.

“I’m really excited for her, and you can just see in herself, she’s pretty bubbly, this kind of happy personality to have around.”