Stosur: Fed Cup can bring out the best in me

After arriving in Brisbane on Monday, Sam Stosur met the press and enjoyed her first hit-out at Pat Rafter Arena ahead of the weekend's Fed Cup tie against Belarus. 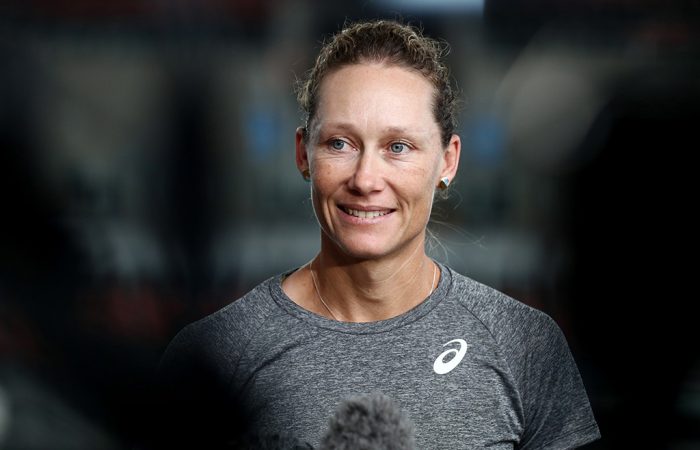 Australian champion Sam Stosur feels she’s in good form ahead of her country’s Fed Cup semifinal tie against Belarus in Brisbane this weekend.

> get your Fed Cup semifinal tickets!

The 35-year-old returns home to Queensland with the wind in her sails; in the past two-and-a-half months she has the Australian Open doubles title and reached the Miami Open doubles final, as well as advancing to the third round of the Miami singles event.

Stosur chatted to the media at Pat Rafter Arena on Monday ahead of her practice session with Daria Gavrilova, and spoke confidently about her game.

“I’m playing pretty well at the moment and there are always things to be working on, which I’m constantly doing, and you’re trying to bring that out into these matches,” she said.

“I think in a scenario like Fed Cup, it can certainly bring out the best in me – I’ve had some really good wins in Fed Cup and always enjoy the experience.

“If I’m called on to play, I’ll certainly be really enjoying that moment and trying to make the most of that opportunity.”

Stosur possesses one of the best Fed Cup records of any Australian to represent the green-and-gold.

She owns more singles wins (29) than any other Aussie player and is a perfect 7-0 in doubles rubbers, helping contribute to a combined Fed Cup win-loss record (singles and doubles) of 36-18.

Having first played in the team back in 2003, she has predominantly been Australia’s No.1 singles player, although this time she has been selected primarily on the strength of her doubles results.

In 2019, she and partner Shuai Zhang are the No.1 ranked team in the WTA Race to Shenzhen.

Ash Barty has taken over the mantle as Australia’s leading singles player, and Stosur says Barty’s success is a confidence boost to the entire team.

“Coming off her win in Miami was incredible – that’s a massive tournament, as big as it gets outside of the slams,” Stosur said of Barty’s recent tournament victory, which propelled her into the top 10.

“For her to win there, I’m sure she’s feeling pretty confident now, even more so that what she was — she had a great Australian summer as well.

“I think the rest of us in the team can try and ride on Ash’s back a little bit with how well she’s playing. She’s the No.1 player in our team for good reason; top 10 in the world. There’s lots for her to be proud of as an individual, but also for the team, to have someone like her leading the way for us.”

The Aussie and Belarus @FedCup teams were put through their paces on the practice court as the countdown to the semifinal begins! #FedCup #AUSBLR@teqld @brismarketing pic.twitter.com/kh9WWVu0dG

Still, even with a players in the Australian team with the credentials of Barty and Stosur, beating the Belarusians won’t be easy.

Especially at a venue where the Aussies have lost their last two Fed Cup ties – to the United States in a 2016 World Group Play-off tie, and to Germany in the 2014 semifinals.

“The girls in February upset the (United) States in Asheville in North Carolina. So it’s always really nice to be playing at home, but it doesn’t necessarily mean that you guarantee that win by any means.

“They (Belarus) are gonna be tough to beat. They’re a very good team, they’ve got many players in the top 60. (Victoria) Azarenka a past Grand Slam champion a couple of times. So there’s really a lot of depth in their side.

“But I think on paper, looking at rankings to rankings, we’re actually pretty even. So I think it’s going to be really hard to split us apart. It’s gonna be a tough weekend for both of us.

“We’re definitely gonna have to play our best tennis to try and get through.”