Australia's Ash Barty is now the only player in the world, female or male, to currently hold a top 10 ranking in both singles and doubles. 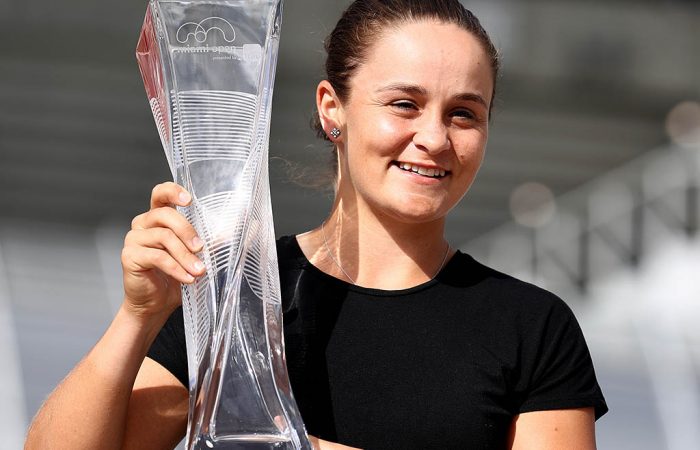 Australia’s Ash Barty has broken into the singles top 10, hitting a career-high ranking of world No.9 following her impressive title win in Miami.

The 22-year-old Barty is now the only player in the world, female or male, to currently hold a top 10 ranking in both singles and doubles.

Barty’s response to the news was typically laconic, laughing as she said: “There you go. How bloody good.

“It’s been a goal of mine – that’s no secret. And it’s amazing what happens when you put your hopes and dreams out into the universe, and do the work. It’s amazing.

“I had an opportunity last week that I wasn’t able to grab, and this week was about coming here and continuing to try and trust the process and enjoy the journey that I’m on. It’s a pretty beautiful thing, being able to play tennis for a living.”

Ash becomes the ninth Australian woman to crack the world’s top 10 in singles, following in the footsteps of Sam Stosur, a top-10 stalwart from 2010 to 2013. She also becomes one of only seven Australians to rank inside the top 10 this century alongside Stosur, Alicia Molik, Lleyton Hewitt, Mark Philippoussis, Pat Rafter and Jelena Dokic.

“It’s a goal that we set at the start of the year, and it’s been a goal of mine for a long time now. And it’s amazing that I’ve been able to achieve it.

“But there’s still a long way to go and I’m not satisfied – I’m still hungry to get better as a person and as a player. And if that means the ranking gets higher and higher, that’s pretty cool as well.”

Barty has built an incredible 18-3 win-loss record so far in 2019. This includes eight wins over top-20 ranked opponents, more than she recorded during the entire 2018 season.

After kick-starting the year with a final in Sydney, Barty became the first Australian woman to reach the quarterfinals at her home Slam in 10 years.

Barty then played a pivotal role in Australia’s stunning upset win over the USA in Fed Cup, winning all three of her matches.

She backed this up with a fourth round appearance at Indian Wells and reached the semifinals in doubles in Miami, before hoisting the trophy following a straight sets win over world No.7 Karolina Pliskova.

This is the first time she’s gone this deep in a mandatory WTA Premier event and it marks the best singles result by an Australian, female or male, since Samantha Stosur won the US Open in 2011.

“I’m so proud of Ash, and I’m sure everyone in Australia feels the same way,” Molik said.

“Reaching a top-10 ranking in world tennis is an amazing achievement and is a well-deserved reward for all of Ash’s efforts on-and off-court.

“We all know what an incredible role model and ambassador for our sport Ash is. She has a tremendous work ethic, always displays great sportsmanship, has an immense drive to succeed and is so well respected by not just her fellow Australian players and Fed Cup teammates, but all the players on the tour.

“Ash is a credit to her country, her state of Queensland, her family and herself. It’s amazing what she’s been able to achieve after all of the hard work and dedication she’s put in, especially in the last 24 months. I couldn’t be prouder of her, or happier for her and her whole team.”

Following a grueling month of tennis in the US Barty is now heading home to Australia for a well-deserved rest, before leading the Australian team in the crucial Fed Cup semifinal against Belarus at Pat Rafter Arena in Brisbane on the Easter weekend, 20-21 April.