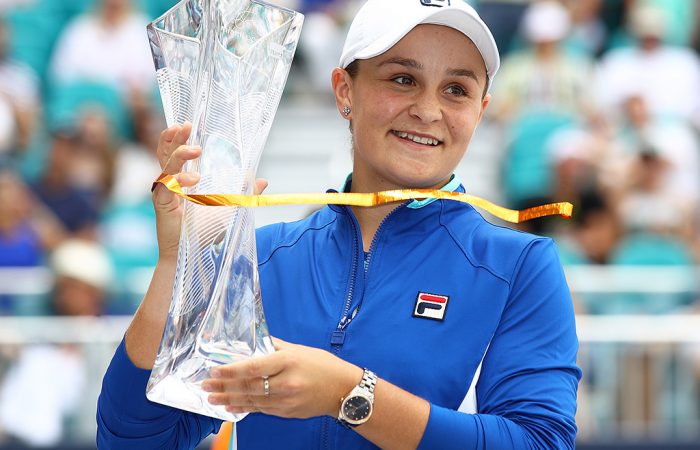 Ash Barty has completed a memorable fortnight at the Miami Open by beating Karolina Pliskova to claim the biggest title of her career.

The 22-year-old Queenslander defeated the No.5 seed 7-6(1) 6-3 to win Saturday’s final before a big crowd at Hard Rock Stadium.

What a performance from @ashbar96 – the 2019 @miamiopen champion!

The win was Barty’s third over a top-10 opponent during the Miami Open, after having beaten No.7 seed Kiki Bertens and third seed Petra Kvitova earlier in the tournament.

The victory over Kvitova – her first in five attempts over the Czech – ensured she will crack the world’s top 10 come Monday.

“I feel a turning point for me was at Wimbledon last year and I’ve been playing some great tennis since then.”

Barty, who was seeded 12th, won her fourth title and the biggest of her career. She improves to 18-3 in 21 matches this year and will rise to a career-high ranking of No.9 next week.

It’s the biggest tournament victory by an Australian since Sam Stosur won the US Open in 2011, a triumph that will earn Barty US$1.35 million.

Barty won with a dominating serve – she finished the match with 15 aces – and wide variety of shots from the baseline, repeatedly extending rallies with scrambling defence. She was broken just once and won 86 percent of her first-service points.

She trailed Pliskova 3-1 in the opening set before working her way back into the contest.

After dominating the tiebreak, Barty slugged it out with Pliskova in a mammoth opening game of the second set before finally breaking serve on her fifth break point to take an early lead.

She would not relinquish it, and broke serve to love in the final game of the match.

“It was important to make it physical,” Barty said.

“I knew I had to have my running shoes on today and make as many balls as possible. You don’t get these opportunities often so I needed to do the right things and enjoy the moment.”