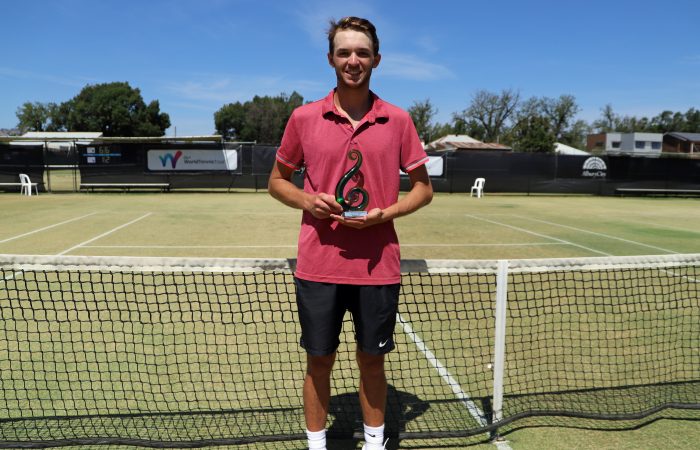 Top seed Klein completed a sublime week on the grass courts of Albury, cruising through the draw without the loss of a set and also taking the doubles title with Queenslander Scott Puodziunas.

Romios found himself in the final courtesy of two consecutive retirements – Alexander Crnokrak and Chris O’Connell were both injured in the second set of their matches – however, his form coming in looked good with an upset win of third seed Arjun Kadhe of India in the second round.

The Victorian teenager stayed with Klein early, before the more experienced Brit took control of the match. Despite some resistance on serve, he continued to put his foot down, claiming the match 6-2 6-1 in just over an hour.

“I’m obviously a little bit disappointed with the loss,” Romios, 19, said, “But Brydan played a really good match today and I don’t think I actually played that bad. It was a good experience to play someone of his level in the final of a tournament.

“It’s really exciting making my first final but there’s still obviously a lot of work to do, trying to get back there again.

“Hopefully I can just build on this and try and consistently go deep in tournaments now.”

The doubles final saw second seeds Klein and Puodziunas taking the honours with a 4-6 7-5 [11-9] win against top seeds Kadhe and Jason Taylor of NSW.