Jordan Thompson joins fellow Aussie Nick Kyrgios in the last 16 at the ATP Delray Beach Open after a businesslike win over Marcel Granollers. 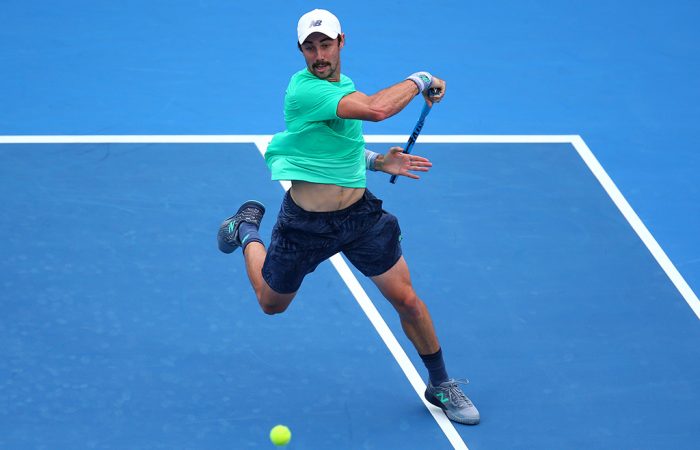 Jordan Thompson continued his strong start to the 2019 season with a straight-sets victory over Marcel Granollers at the Delray Beach Open.

Thompson, ranked 68th, beat the Spaniard 7-5 6-1 to advance to the second round, where he joins compatriot Nick Kyrgios.

Kyrgios a night earlier got the better of another Australian, John Millman, in a third-set tiebreak.

Thompson broke Granollers on four occasions while being dominant with his own serve – winning 84 per cent of first-serve points and more than half on his second serve – throughout the 81-minute victory.

He has now won three of his past four matches and with a win in the next round would notch his third ATP quarterfinal of 2019.

Thompson’s next opponent is Italy’s Andreas Seppi, who got past Aussie Bernard Tomic in his opening match.

Tomic reached 30-40 when Seppi was serving for the win yet couldn’t convert, finishing 0-for-6 on break points throughout the contest. Seppi went on to complete victory in 76 minutes.

Kyrgios, meanwhile, will face Radu Albot in the second round after the Moldovan beat big-serving Croat Ivo Karlovic in straight-sets.

In doubles, Kyrgios teamed with American Jackson Withrow to beat Santiago Gonzalez and Aisam-Ul-Haq Qureshi 6-4 7-5, a result sending them through to the quarterfinals.

The all-Aussie pairing of John Millman and Alexei Popyrin fell in straight sets to second seeds Ken and Neal Skupski in the opening round.