In an all-Australian battle, Nick Kyrgios gets the better of fifth seed John Millman in a third-set tiebreak to advance to the last 16 of the Delray Beach Open. 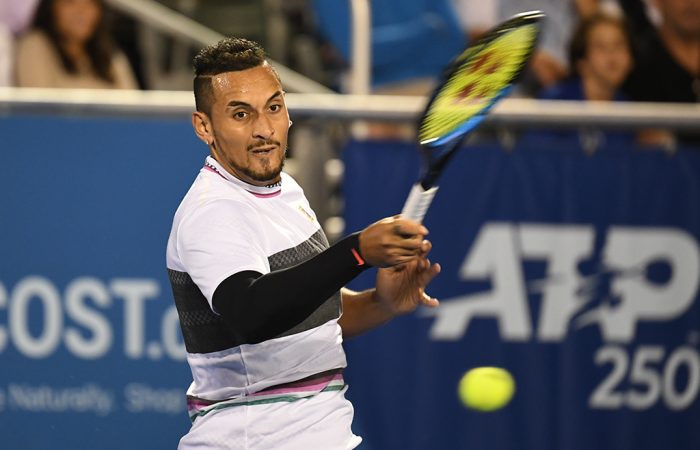 Nick Kyrgios came out on top of an all-Aussie clash at the Delray Beach Open on Monday local time, beating John Millman in a final set tiebreak.

The 6-4 6-7(1) 7-6(3) victory sends Kyrgios through to the second round of the ATP hard-court tournament, where he will face either Ivo Karlovic or Radu Albot.

Kyrgios got through thanks to the strength of his serve; he notched 19 aces and a winning percentage of 85 on first-serve points.

He saved the only break point he faced – in the fourth game of the first set – and went on to win in two hours and four minutes.

The victory also helped him turn the tables on Millman, who won their only previous encounter in the first round of the US Open in 2017.

“My serve keeps bailing me out of these types of matches, which is pretty fortunate for me,” said Kyrgios.

“I knew it wasn’t going to be easy. John is one of the toughest competitors on tour and he’s a good mate of mine, so I’m just happy to get through with the win.”

The Delray Beach crowd loved the battle between Nick Kyrgios and John Millman tonight. Nick gets the win in three tough sets & will face the winner of Karlovic and Albot in the next round. #DBOpen

Jordan Thompson and Bernard Tomic will play their first-round matches on Tuesday, against Marcel Granollers and Andreas Seppi respectively.

Meanwhile, at the WTA tournament in Budapest, Hungary, Arina Rodionova fell in a third-set tiebreak to Natalia Vikhlyantseva in the final round of the qualifying draw.