Australia's Ajla Tomljanovic loses to Ukrainian Dayana Yastremska in the final of the Thailand Open. 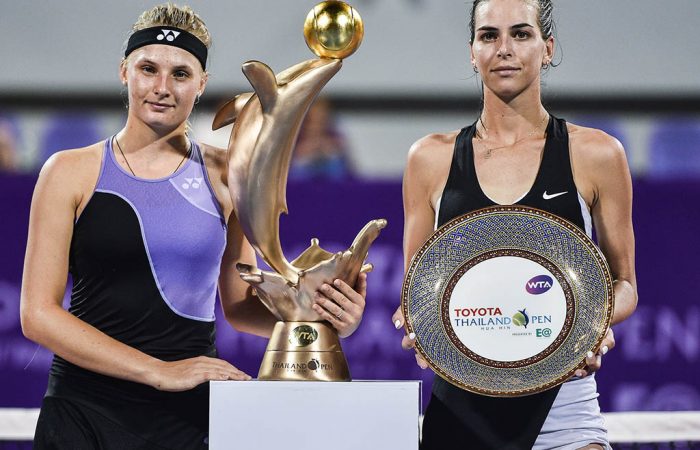 Australia’s Alja Tomljanovic missed out on a first WTA tournament win as teenager Dayana Yastremska fought back from 2-5 down in the final set to claim the Thailand Open in Hua Hin.

Ukrainian Yastremska was just two points from defeat at deuce in the decider but turned it around to win the match 6-2 2-6 7-6(3) in two hours, 22 minutes.

“The match was really tough for me,” said Yastremska.

“The first set I played maximum and the second set, I felt that I can’t play like that, like how I played the first set, and I didn’t know what’s going on.

“I tried my best, and I tried to do the same things I was doing in the first set, but it’s just feelings like you’re empty, completely empty. I don’t know how to describe that.”

Chasing her first career title, sixth seed Tomljanovic found herself up against it as 18-year-old Yastremska came out of the blocks quickly, wrapping up the first set in 33 minutes.

In the second, Tomljanovic, with the score tied at two games apiece, dominated play with some solid baseline strikes, forcing Yastremska into a string of unforced errors and losing four games in a row as she dropped the set in 31 minutes.

Yastremska, who claimed the championship at Hong Kong just four months ago, broke for a 2-0 lead in the decider but after losing the next five games to trail 2-5, she called for a trainer to treat her left leg.

On resumption she reeled off four straight games to lead 6-5 and in the tiebreak, Yastremska took full charge with some deep groundstrokes, eventually blasting a forehand winner on her first match point to wrap up the victory.

It brings a second career title for Yastremska, while Tomljanovic continues to wait for her first after four runner-up finishes in WTA singles finals.

The Aussie can take the consolation that she is projected to rise to a career-high ranking of No.41, however.