De Minaur too strong for Simon, returns to Sydney final

Playing an opponent more than 14 years his senior, Alex De Minaur brushes aside Gilles Simon to set up a tantalising final against Andreas Seppi. 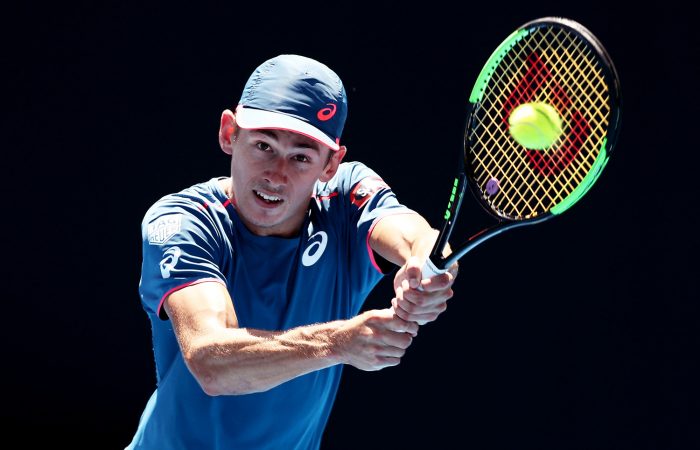 Australian Alex De Minaur is through to his second straight Sydney International final after beating Gilles Simon 6-3 6-2 in their semifinal on Saturday.

After the match was postponed from the previous night due to rain, De Minaur will return to court tonight – not before 7pm – for his final against Andreas Seppi.

“Might hop in the ice bath and then have a nap,” he laughed when asked about his post-match routine.

“Gotta try and recover for the final later on and I’ll just do everything in my power to be ready, and just come out firing.”

The 19-year-old Australian assumed control of the match in hot conditions when he broke Simon in his first service game.

The veteran Frenchman, aged 34, had four break points in the ninth game of the first set, yet De Minaur was able to convert his third set point to take the opener.

He was even more dominant in the second set, wrapping up the match in 94 minutes.

“It’s an incredible feeling (reaching back-to-back finals). No better feeling, especially doing it home, in front of my family and friends. I really appreciate the support.

“Let’s hope both Ash (Barty) and I, we can do one better this year.”

Continuing the intergenerational theme of his recent Sydney matches, De Minaur will take on another 34-year-old in Seppi, who is appearing in his first Sydney final – and first ATP final of any kind since 2015.

Barty will play Petra Kvitova in the women’s final, which precedes the men’s final at Ken Rosewall Arena from 5pm AEDT.