Alex De Minaur again got the better of countryman Jordan Thompson to return to the semifinals of the Sydney International, where he'll face Gilles Simon - a victory over John Millman. 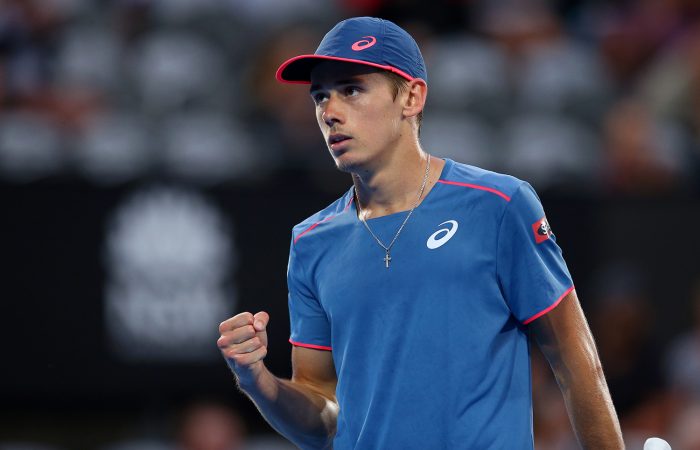 Alex de Minaur will have a shot at his second straight Sydney International final but his hopes of meeting another Australian in the semifinals were dashed after John Millman was knocked out in a late-night thriller.

De Minaur booked his spot in the final four on Thursday, knocking Davis Cup teammate Jordan Thompson out of a tournament for the second time in as many weeks with a gritty 7-6(4) 6-3 win.

Millman then followed Thompson out the door hours later, when he was beaten 7-5 3-6 7-6(3) by Gilles Simon in the early hours of Friday morning.

It left De Minaur as the last Australian standing in the men’s side of the draw.

“It’s never easy coming out and playing a fellow Australian teammate and a guy that I have grown up with, someone that I have looked up to as an older brother,” the world No.29 said.

“(I’m) very happy with my efforts here. I knew coming in it was never going to be an easy task, and he was going to leave it all out there.”

A frustrated Thompson was unable to make the most of a handful of opportunities on De Minaur’s serve, including a 4-1 lead in their first set tiebreaker and an early break in the second.

Instead, De Minaur showed why he has rocketed almost 140 places in the world rankings since reaching the final last year by storming back to complete the victory.

De Minaur said he’s been satisfied with his build up to the Australian Open, where he’ll play 103rd-ranked Pedro Sousa from Portugal in the first round.

“I’m very proud where I am. Obviously coming in here was very different, a lot more expectations on me now,” he said.

“I feel like I have dealt with the situations really well, focusing on what I need to focus on, which is me going out there every single point and just competing.”

Meanwhile, Millman’s loss came in a see-saw affair that stretched nearly three hours, as the Australian served for the match in the final set before the Frenchman broke for a second time to send it to a tiebreak.

Simon then assumed control, capitalising on a number of errors from his opponent who has battled a flu throughout the week.

“Conditions probably didn’t suit me a whole lot,” Millman said. “But at the end of the day it was the same conditions for everyone and Gilles was better.”