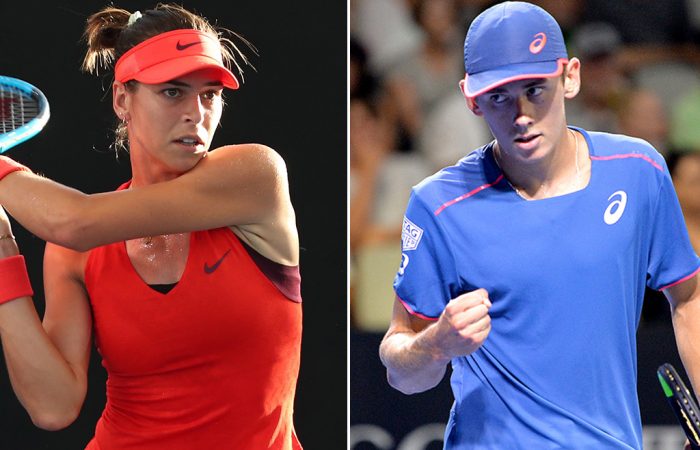 Australian Ajla Tomljanovic has registered one of the best wins of her career, beating British star Johanna Konta in straight sets at the Brisbane International.

After making a frustrated Konta pay for her errors in the first set, world No.46 Tomljanovic outlasted her opponent in a topsy-turvy second to win 6-2 7-6(2) on Wednesday to reach the quarterfinals.

There she will face 2017 Brisbane champion Karolina Pliskova after the fifth seed accounted for qualifier Marie Bouzkova 7-5 6-2.

A night after brushing aside Alexei Popyrin 6-2 6-2, De Minaur ousted Jordan Thompson 6-4 6-2 to reach the last eight for the second straight year.

“I love playing here and I can’t wait to come back and leave it all out there again,” he said after restricting Thompson to just 18 per cent of points won on second serves.

“A big focus of my pre-season was to get a little bit bigger, stronger and fitter And we put a lot of hours into the gym doing fitness and conditioning. I’m very happy to see it all pay off.

“I’m playing some great tennis and moving really well, so I’m very proud of myself.”

De Minaur will next face the winner of the match between former world No.5 Jo-Wilfried Tsonga and lucky loser Taro Daniel, aiming to reach the semifinals in Brisbane for the second straight year.

Tomljanovic and Konta were broken three times in the second set as 37th-ranked Konta fought back from 0-4 down to take a 6-5 lead in the second-round match.

Tomljanovic had numerous chances to close out the match, including when she hit a forehand a foot long on her first match point at 5-4 before Konta held serve to level before making the third break.

The match threatened to play out similarly to the corresponding fixture last year when Konta came from a set down to beat the Australian.

But Tomljanovic forced the tiebreak with a crosscourt forehand winner to finish a 22-shot rally for her third break before maintaining the momentum to close out the match in one hour and 21 minutes.

Tomljanovic’s return game was superb as she allowed Konta to win just 52 per cent of points on her first serve.

“I think in the end that’s kind of what got me through, but also my serve kept me going the whole match,” she said.

“I relied on that so I could do more in my return games.”

The win continues a surge in the Australian’s career after she put a couple of injury-hit seasons behind her last year to climb 72 places up the rankings.

She was a finalist in WTA events in Rabat and Seoul last year.