Birrell: tennis is in my DNA

Kimberly Birrell reflects on her breakthrough performance at the Brisbane International - and the journey she undertook to get to this point. 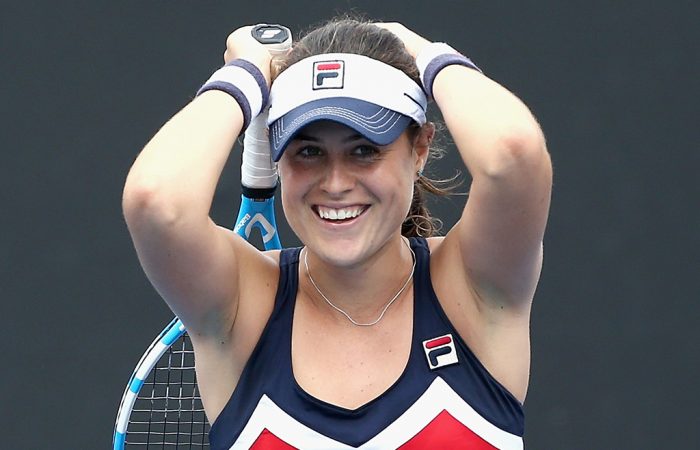 Kimberly Birrell is known to Australian tennis fans as a promising tennis prospect, but she announced herself to a global tennis audience with her performance at the Brisbane International on Monday.

Using the energy of a rapturous home crowd to will her way to victory amid impending cramps, Birrell battled for more than three hours to seal just her second tour-level main draw victory of her career.

She lines up against Lesia Tsurenko on Tuesday night for a place in her first WTA quarterfinal.

“It definitely hasn't been an easy journey. Two years ago I probably hadn't even picked up a racquet in three months.”

Surgery wiped out Kimberly Birrell’s ranking in 2017. Inside her journey towards a stunning win @BrisbaneTennis.

“You definitely can’t beat yourself before walking out on to the court or there’s no point in walking through that gate,” Birrell said when asked if she truly believed she could unseat a top-10 player.

“I knew that I’ve been playing good tennis. And yeah, I definitely believed in myself, sure.”

Birrell’s victory took on an extra significance given the journey she took to arrive at this point.

A promising junior who reached the semifinals of the girls’ singles at Australian Open 2014, Birrell transitioned strongly to the professional circuit in 2015, and cracked the WTA top 300 in early 2016.

Yet an elbow injury struck, one which required surgery and which wiped almost an entire year from her career.

Returning to tennis 11 months later in early 2017 as an unranked player, Birrell had a mammoth task ahead of her when it came to rebuilding her career.

Inching her way back steadily, she has returned to the top 100 and recently won the Australian Open Play-off to guarantee her a spot in the main draw at Melbourne Park in a fortnight’s time.

“It definitely hasn’t been an easy journey. Two years ago I probably hadn’t even picked up a racquet in three months,” she reflected.

“So I didn’t know where I was going to end up, but I tried putting in a lot of time in the gym. And I had never had any doubt that tennis was what I wanted to do, and I did a lot of work to have done a lot of work to get back to where I am now.

“We dream about moments like this. So, yeah, I’m definitely going to take it all in and just enjoy this experience.”

Birrell has indeed been dreaming of moments such as these; ever since she was little she has loved the sport.

“My parents love tennis. My dad played, and coaches. And then my mum also played. And on my mum’s side my grandparents played, and my grandpa built a tennis court for my mum and my mum’s sister at their farm,” she explained.

“So we always joke around that it’s kind of in my DNA.

“In saying that, though, they never forced it on my brother and I. We just spent a lot of time around tennis courts, and we both fell in love with it and I’m very lucky to share a passion with my parents, and we have an awesome relationship.

“They don’t have (the farm) anymore, but it’s in New South Wales, in a tiny town called Piney. Yeah.

“But my parents actually run a tennis club on the Gold Coast. So I’m really fortunate. There are tennis courts everywhere.”