Kimberly Birrell did not drop a set all week at Melbourne Park, with her latest victory - over Astra Sharma in the AO Play-off final - earning her an Australian Open 2019 main-draw wildcard. 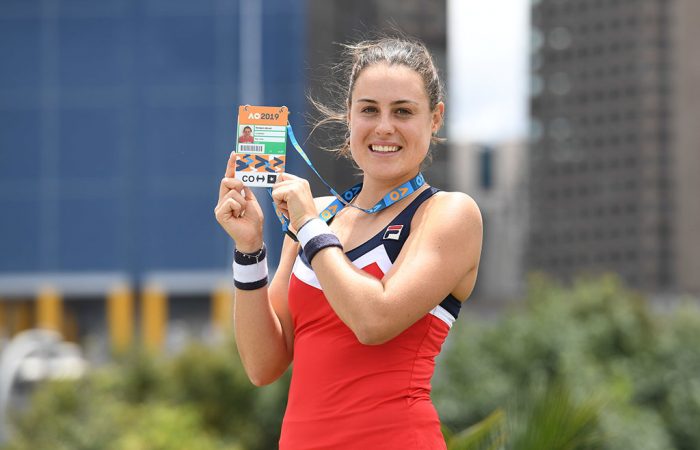 Kimberly Birrell capped a stellar week at Melbourne Park with victory over Astra Sharma in the AO Play-off final on Sunday.

The Queenslander’s 6-4 6-2 win means she earns a wildcard into the main draw of Australian Open 2019.

Birrell did not drop a set in four victories throughout the Play-off, defeating Gabriella Da Silva-Fick, Jaimee Fourlis, Ellen Perez and then Sharma to earn a trip back to Melbourne Park in January.

“So many mixed emotions – I think it all kind of hit me in the end, because I knew she was going to put up a fight until the very last point until we shook hands,” Birrell said.

“So happy, and just so much joy, and maybe a little bit of relief too. I’ve been waiting for this opportunity and I’m so glad that I was able to take it.”

The winning moment! @kimbirrell98 seals her spot in the main draw at @AustralianOpen 2019 with a 6-4 6-2 win over Astra Sharma in the #AOPlayoff final. pic.twitter.com/zOzwky6QJ4

Birrell’s journey to this point has been an impressive story of persistence.

She underwent elbow surgery in 2016, an injury that wiped out the bulk of that season and kept her off court for 11 months. She fell outside the world’s top 1,000 in early February 2017 before clawing her way back to No.349 by year’s end.

She last appeared at the Australian Open in 2016 as a main-draw wildcard and faced Karolina Pliskova in the first round, pushing the then-world No.9 during a 6-4 6-4 defeat.

Two years earlier, she advanced to the semifinals of the girls’ singles event.

“It feels like such a long time ago now. I feel like I was a little baby,” Birrell said of her 2016 outing.

“But obviously it really helps having been through the whole experience before. I played juniors, I’ve been around the environment. It’s not gonna be anything new. And during that AO (in 2016) I played on Hisense Arena, one of the biggest courts in the world. I’m definitely gonna draw on that experience, for sure.

“I feel like I’ve just played so much more tennis since then; my body is completely different to what it was back then. I have so much more faith in myself, and that I can back up match after match and compete against the top girls.”

Sharma broke early to open a 2-0 lead in the first set but Birrell responded by taking six of the next eight games to pocket the opener.

Birrell broke in the first game of the second and saved multiple break points in the following game with winners to consolidate for a 2-0 lead.

She played a backhand winner for 3-0 while a pair of forehand winners in the following game helped her out to a 4-0 lead.

Sharma got on the board in the fifth game but Birrell would not be pushed off course, neutralising Sharma’s power while playing with controlled aggression herself to remain in front.

“There were a little bit of nerves creeping in at the end – I just had to take it one point at a time,” Birell admitted.

“She has some really big weapons – she obviously has really good serve and really good forehand. I knew I just had to worry about my end of the court, kind of just back myself, that whenever I got an opportunity I just had to take it.

“I’m gonna enjoy this moment first, celebrate with my family and friends and coach, because they’ve put in so much hard work too … and then start working again.

“I have something crazy awesome to look forward to. Just gonna work really hard between now and then and hope to be ready to go.”