Wildcard Kimberly Birrell recovers from 3-5 down in the third set to upset 10th-ranked Daria Kasatkina as qualifier Destanee Aiava shuts out Kristina Mladenovic in straight sets. 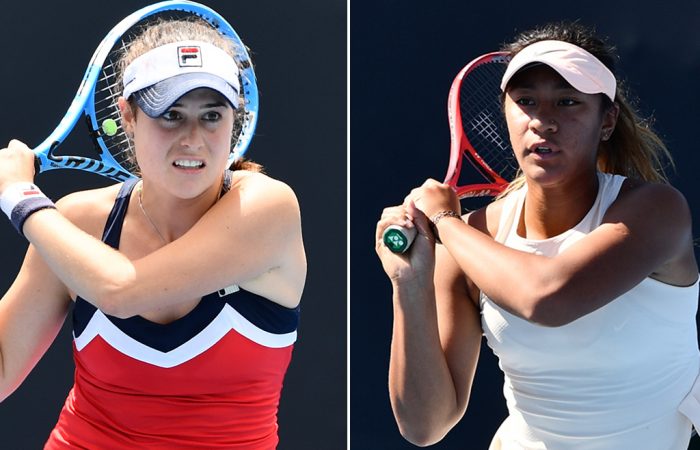 Australian wildcard Kimberly Birrell toppled world No.10 Daria Kasatkina in a three-hour test of nerves in the first round of the Brisbane International.

She will be joined in the second round by Melbourne qualifier Destanee Aiava, who dominated proceedings against Kristina Mladenovic to win 6-3 7-6(2) and complete a perfect start for the Australian contingent.

Aiava has now won four consecutive matches in Brisbane, her latest against a former world No.10.

“I think the momentum of playing three matches in a row (in qualifying) helped me today, instead of having a break,” she reflected.

“I felt pretty good on the court. Mentally I thought I stayed with her really well. I’m really happy to get the win today.

“I’m actually loving being out here, playing my third Brisbane (main draw). I think being tough and loving the challenge has always been in my background so that really helps a lot.”

Birrell, meanwhile, had won the Australian Open Play-off final earlier this month to secure a spot at January’s Grand Slam and maintained that form against the highly-fancied Russian Kasatkina.

Dropping an early break in the third set and then losing her serve at 3-4 wasn’t enough to deter the Queenslander, who unleashed a series of crushing backhands to break twice herself and serve for the match at 6-5.

Kasatkina broke back, but the 283rd-ranked Birrell played a fearless tiebreaker to claim the biggest scalp of her career in a battle that lasted three hours and eight minutes.

“I’m in shock. I can’t believe it,” Birrell said on court.

“Thank you so much to everybody for coming out and supporting me – I really couldn’t have gotten through that without you. I was so close to cramping in the end. Just using your guys’ energy and you really got me through.

“It’s so important to stay positive and believe in yourself. I just left it all out there. She’s an unbelievable player – I’ve looked up to her for a really long time. I knew it was going to be a very physical match.

“To have my first top-10 win where I train every day at my home means the world, and I will never forget this moment.

Ukraine’s Lesia Tsurenko had an easier time of it in her first-round clash with Mihaela Buzarnescu, prevailing 6-0 6-2.

She will play Birrell in the second round, while Aiava meets US Open champion and second seed Naomi Osaka.