Millman marches into Brisbane second round

John Millman got stronger as the match wore on to shut out Tennys Sandgren in the third set and advance to the second round of the Brisbane International. 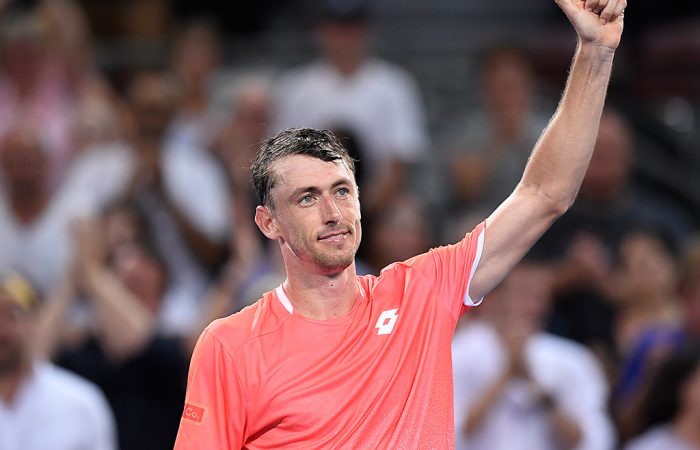 Hometown hero John Millman has reached the second round of the Brisbane International after overcoming American Tennys Sandgren.

Although the Queenslander missed a match point in the second set, he finished strongly in the third to advance to the last 16 at his home tournament for the fourth time in a row.

"The hometown hero gets it done!"

John Millman needs three sets, but ousts Tennys Sandgren 7-6(6) 6-7(6) 6-0 to advance to the 2R of #BrisbaneTennis and sets a date with Grigor Dimitrov there pic.twitter.com/lfkphJyTJd

“(It was) really tough. It’s not easy after coming out after having a bit of a layoff,” Millman said.

“You can do all the work in the pre-season but there’s nothing like a hard match like that. I thought it was very physical.

“I’m lucky to have supporters all over the world but I’m lucky my biggest and most loyal supporters are in this stadium.

“I grew up just down the road. The sign of a good supporter is not someone who just rides the highs with you but also the lows and there are plenty of people littered through this stadium tonight who’ve been there all the way.”

Millman, who reached the top 40 for the first time in his career this year on the back of beating Roger Federer at the US Open, will meet sixth seed Grigor Dimitrov on Wednesday.

He pushed Dimitrov to three compelling sets when they met at the same stage in Brisbane 12 months ago.

“I think that’s the type of match you want, the one I had today,” Millman said.

“I could test my body and came through it really well.

“I’m looking forward to it. These are the ones you want to play, you want to test yourself against the ones I see as some of the best players in the world and what better place to do it in the world than Brissy.”

Congratulations on your 1,000th career match, Sam Stosur! What an outstanding career you've continued to have #BrisbaneTennis @bambamsam30 pic.twitter.com/lJ2SVW1hDF

But unlike her fellow Queenslander, Stosur was eliminated in the first round for the fifth time in six years.

The 34-year-old appeared set for a rare Brisbane victory after a strong opening set when she responded to being broken in the third game by breaking back twice.

But the 74th-ranked Stosur, who last reached the second round of her home tournament in 2016, fell away when qualifier Bouzkova hit her straps on serve.

Bouzkova was unstoppable in the final two sets, losing just two points on her first serve as wildcard Stosur was left to rue being broken in the opening game of the second set after saving five break points.

“If I was able to hold that game, you never know. Maybe that gave her a bit of a sniff,” she said.

In nine visits to Brisbane, Stosur has not been beyond the second round.

The 2011 US Open champion will contest the Sydney International next week as she continues to tune up for Melbourne Park, where she has lost in the first round in her past three attempts and not made the third round since 2014.

She has a slightly better record at Homebush, reaching at least the second round in three of her last four visits.

Under new coach Nick Watkins, Stosur indicated this week she had taken a fresh approach to hardcourt – her lesser preferred surface to clay – in the off-season.

She was unperturbed by her form in the first-round loss as she irons out her game.

“It’s not a total disaster,” she said.

“She played well. I’m still really happy with quite a few things that I did out there and feel like I’ve still taken a step in the right direction.”