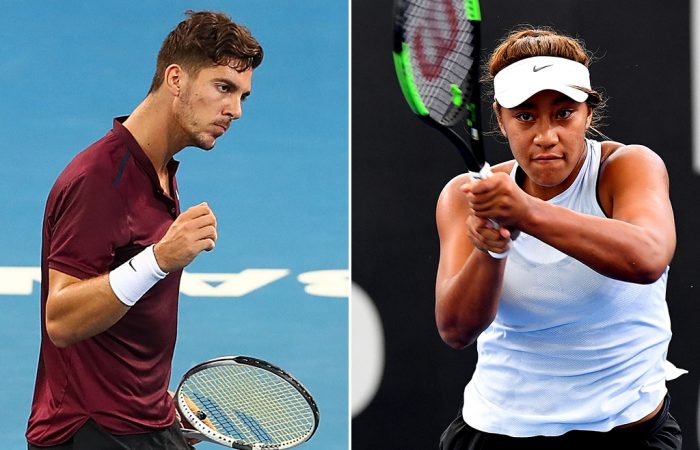 Yet another injury has not stopped Australia’s Thanasi Kokkinakis from qualifying for the season-opening Brisbane International.

Despite nursing knee soreness, the 22-year-old secured his spot in Brisbane’s main draw for the first time in four years after downing qualifying’s third-seeded Chilean Christian Garin 6-2 6-4 on Sunday.

In women’s qualifying, Australian 18-year-old Destanee Aiava overcame former world No.24 Christina McHale of the US 7-5 6-1 to make the main draw.

In 2017, Aiava stormed through qualifying before bowing out in the Brisbane second round to dual Grand Slam champion Svetlana Kuznetsova of Russia.

This time around she will face former world No.10 Kristina Mladenovic in the first round of the main draw.

Kokkinakis has boosted Australia’s contingent in the men’s draw to eight.

He revealed he was still feeling the effects of a damaged knee cap suffered back in April when he tripped over an on-court advertising barrier while playing in the Monte Carlo Masters.

The former world No.69 required more treatment in the off-season but is showing no signs of slowing down in Brisbane, determined to make up for lost time.

He successfully returned to the tour in 2018 following a string of injuries that kept him sidelined for the best part of two years.

“I feel like I belong in the main draw. I was limited what I could do in the pre-season (with knee injury) but I am getting there,” Kokkinakis said.

“Ever since Monte Carlo the knee gets a little sore after (matches) but it is okay when I play. I just need to stay on top of it but structurally there is nothing wrong with it.”

Despite his freak Monte Carlo injury, Kokkinakis this year enjoyed his best season since 2015, including a shock win over Swiss great Roger Federer at the Miami Open in March.

Kokkinakis fell out of the top 1000 at the end of 2016 but has now lifted his ranking to world No.150 ahead of the Brisbane tournament.

Australian Marc Polmans wasn’t so lucky, bowing out in the final round of qualifying 6-2 6-2 to Japan’s Yasutaka Uchiyama.