Astra Sharma overcame Zoe Hives in a high-quality, physical battle to advance to the final of the Australian Open Play-off, where she will meet either Ellen Perez or Kimberly Birrell. 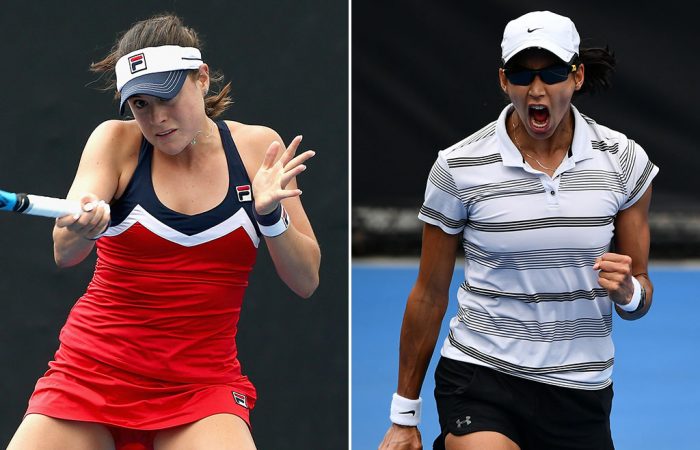 Astra Sharma will meet Kimberly Birrell in the AO Play-off women’s final on Sunday, with an Australian Open main draw wildcard on the line.

West Australian Sharma beat Zoe Hives 3-6 6-4 6-3 in the first of the day’s semifinals before Birrell overcame Ellen Perez 6-4 6-4 in a rain-affected second semi.

Sharma eventually got on top of Hives in a physical battle showcasing both players’ serving prowess, fitness and forehand power.

She’ll play either Perez or Birrell for an @AustralianOpen wildcard. pic.twitter.com/WtxDIOopln

“I didn’t expect this at all. I just really wanted to put in some good matches and this is unreal – I’m just so happy with the way I’m playing,” Sharma told tennis.com.au.

“I think she’s playing amazing; she’s been doing so well this year and I knew going in that it was gonna be hard returning her serve and she’s so good from the back as well, so it was gonna be a challenge.

“She played pretty well that first set and I was a little slow off the blocks. Made a few too many unforced errors; there was only one break but that’s all she needed. In the second set, I was like, look, it’s just one break, I just need to not let up on my service games and it should be OK.

“There were a lot of deuce games and honestly it was just like a few points here and there, so I’m really lucky to get through that.”

With games going on serve in the second set, Sharma had the advantage of serving first, and brought up set point in the 10th game with a feathery backhand dropshot winner.

When Hives missed a drive volley into the net on the next point, the match moved into a third set, and the wind went out of the Victorian’s sails.

Sharma built a 3-0 lead, and, after Hives took a medical timeout when trailing 4-1 due to what appeared to be a right hip complaint, she extended her lead to 5-2 with a service hold at love, capped with an ace.

Two games later, Sharma played a forceful, positive game on serve to close out the match.

“I was definitely feeling pretty good on my service games so I knew I just had to make a lot of first serves and put some pressure on her,” Sharma said.

“As Zoe said yesterday, anyone can win. I’m just absolutely thrilled to be in the final, to put myself in that position.

“It would just be a dream come true (to win the wildcard). But either way, it’s good. I’m just happy how I’m playing and setting myself up long term for the Aussie summer.”

Birrell too consistent for Perez

Birrell skipped out to an early lead thanks to a break in the first set against a dangerous yet error-prone Perez.

The Queenslander never relinquished her advantage and took the first set before rain fell early in the second set.

When play resumed roughly one hour later, Perez earned a break point for a 4-2 lead only for Birrell to escape then snatch a second break in the seventh game.

Beating Perez with consistency, depth and clever shot placement, Birrell arrived at 15-40 – and double match point – in the ninth game, only for Perez to serve her way out of trouble.

Yet Birrell would not be denied in the following game.

“I knew it was gonna be really tough going into today because Ellen is a really tough competitor and she has a lot of big weapons,” Birrell said.

“My game plan was more directed down my end of the court, just staying solid and kind of biding my time waiting for her to have a little lull until I could get my opportunities on her serve, because she has such a great serve.

“(And) just staying really positive, trying to cope with adversity as much as I can – especially with the weather the last couple of days. My attitude is something I’ve really been working on and every time I step onto the court just trying to really enjoy myself and enjoy the battle and I’ve been doing that in all my matches this week.”

Indeed, the world No.288 has not dropped a set this week in the Play-off, recording wins of 18/u champion Gabriella Da Silva-Fick and 2017 Play-off winner Jaimee Fourlis before her triumph over Perez on Saturday.

She and Sharma have split two previous meetings, which came on the Australian Pro Tour in late 2017.

“She (Sharma) has had an awesome back end of the year. She’s gonna be feeling really confident and is playing some really good tennis,” Birrell noted.

“It’s not every day you get to fight for a wildcard into the Aussie Open so I just have to enjoy every second of it. I’m trying not to think about it to much until tomorrow (laughter) – you have to kind of think of it as just another tennis match, but obviously as an Australian I’ve grown up watching Aussie Opens my whole entire life.

“I’ve played Aussie Open before and that seems like such a long time ago … I got a wildcard a couple of years ago (in 2016) but that was pre surgery with my elbow. So it would mean a lot to me if I could kind of go full circle and get to play it again.

“Just super excited and grateful for this opportunity.”