Crnokrak back in 18/u Australian final

Defending champion Alexander Crnokrak will face Rinky Hijikata for the 18/u Australian title, while Gabriella Da Silva-Fick and Olivia Gadecki will fight it out for the girls' crown. 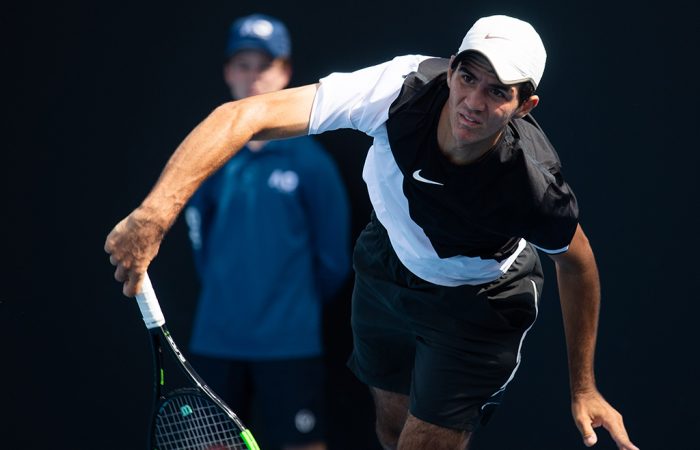 Alexander Crnokrak survived tough conditions and a game opponent to advance to the 18/u Australian Championships final.

There he will meet No.2 seed Rinky Hijikata, who swept to a 6-1 6-4 victory over Dane Sweeny.

In the girls’ final, top seed Gabriella Da Silva-Fick and Queensland’s Olivia Gadecki will face off after both recorded straight-sets victories on Friday.

“Dad was a professional golfer and mum was a basketballer. After going to a camp in Homebush I got an email from Tennis Australia saying I have good physical ability for tennis, so would I be interested in learning to play? I was playing serious basketball, but then I won 12s clay-court nationals and that was kind of it for me. My parents were like, ‘Whatever you want to do, we're going to back you.’ I really like how you're on your own out there. It's one-on-one combat, and I enjoy that physical and mental battle. My coach, Andrea Stoltenberg, has really taught me to understand tennis mentally and tactically. I like Dominic Thiem and Denis Shapovalov – the way they play physically and their mental attitude. I probably base my game a little bit around theirs as well. I want to win Grand Slams and be top 10, but I think playing that level and getting those good results week in, week out, consistently, would be my biggest goal.” Gabriella Da Silva-Fick, 18, NSW. #decembershowdown

Crnokrak raced through the first set in hot, windy conditions against Ken Cavrak, before the Victorian made the second set a tighter affair.

Crnokrak, the defending champion, led by a break midway through the second set before Cavrak found his range and began striking regular winners.

He dominated the ensuing tiebreak before Crnokrak settled in the third and resumed his dominance to complete a 6-1 6-7(2) 6-1 triumph.

“I thought the conditions were very tricky today … he beat me the last two times so I knew it was gonna be a tough match,” Crnokrak said.

“Second set I knew he was gonna come back. It was really close the whole time … He hit some amazing shots to get back in (it). I just thought, if I keep playing my game, surely he can’t keep hitting these winners.

“I was serving first in the third set which kind of helped, because I held the first game and I saw he was a little but shaky.

It was the first time all week the 18-year-old Queenslander had dropped a set, a dominance he attributed to excellent serving.

It was apparent in the first and third sets of his triumph over Cavrak; the pace of his delivery frequently caught the Victorian off guard.

“I think I’ve been serving really well … that puts pressure on the other guy to make sure he serves (well) and it makes me relaxed in their service games,” he said.

“Every nationals, when you get to the final, it feels awesome. Knowing that I’ve been here (before) it does make it more special.”

Hijikata is yet to drop a set in five matches during the 18/u event so far and could be considered the favourite going into the final, given his higher seeding and the fact he recently cracked the top 15 in the ITF world junior rankings.

Gadecki, meanwhile, subdued Annerly Poulos 6-3 6-2 in the first of the girls’ 18/u semifinals.

The pair have a long association, having contested the Australian 14/u final at the December Showdown in 2016 – a match Gadecki won in three sets – before Poulos won their most recent match in three sets in an ITF junior clay-court final in Palermo, Italy.

“I didn’t think I was playing my best tennis, but I thought what I did was enough and that’s kind of all I focused on throughout the match,” Gadecki said.

“Annerly and I have had some (competitive) history. We’ve had big battles. Mentally I was coming in kind of the underdog, which always helps. So I can just swing freely and go for it. Annerly’s a really good player, and especially in these winds.”

Gadecki, aged 16, described reaching the 18/u final as a “surreal” feeling.

“I didn’t think I was gonna get this far, coming out of the pool and how I’m playing at the moment, I don’t think I’m in the greatest form,” she admitted.

“But I’m happy to get the win today.”

The top seed said on Thursday, following a dramatic quarterfinal win over Ivana Popovic, that she had battled up-and-down form throughout the week at Melbourne Park.

But she was in ruthless form on Friday, crushing two return winners and then a swinging volley winner in the final game to close out victory in just 54 minutes.